“The state can provide security to its people and all neighbours only through such a security policy founded on human rights, political freedoms and social and ecological security, and in relation to neighbouring countries and people, it includes intensive social and diplomatic measures for non-violent conflict resolution and reconciliation with those with whom conflicts or tensions exist.”

The 1991 Declaration of Peace 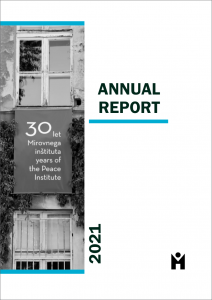 The review of 2021 begins with the sad news that our long-time colleague, friend and one of the Peace Institute’s founders Tonči (Ante) Kuzmanić passed away in November last year. Tonči was a rebel-researcher and, in this sense, a relentless critic. He often reminded us insightfully of symptoms, events, and social processes that most researchers had overlooked. With his original ideas, radicalism, and sparkling temperament, he made a decisive contribution to the shape and survival of the Peace Institute. He was a mentor and an inspiration to our younger colleagues. He will be remembered as a co-worker, colleague, and friend who knew how to throw an unforgettable rock’n’roll party from scratch, simply with his guitar and mastery of music. Glory to him!

Last year was also marked by the 30th anniversary of the founding of the Peace Institute. We celebrated it with scientific conferences, a public event, and an extensive online exhibition entitled Who are WE? The title has a double meaning (in Slovene language, abbreviation of the Peace Institute – MI – is also a personal pronoun “we”), as it challenges the identity of the Peace Institute and the people associated with it, and the word ‘WE’ also addresses the inhabitants of the state of Slovenia, also founded thirty years ago. Our perspective was not only on the past but on the contrary, especially on the future. It is evident that, on the one hand, we must act defensively and stand up for what was taken for granted in the past (for human rights, democracy, public healthcare and education, work and decent pay, gender equality, the right to quality leisure, etc.), and on the other hand to address new, global themes necessitating a joint action of large and small actors (opposition to global militarisation, efforts to preserve biodiversity and fight for climate justice).

The current social circumstances in Slovenia and globally are marked by the crisis of democracy and the rule of law, the health crisis, and the deepening of economic disparities, so it is no surprise that we strengthened the Institute’s thematic pillar politics last year. We acquired two basic research projects in this field: Hate speech in contemporary conceptualisations of nationalism, racism, gender, and migration (headed by Veronika Bajt), which examines, among other things, the definitions of hate speech and the effectiveness of counter-narratives, and Transnationalisation of care for the older adults – diversity, recruitment, inequality (headed by Majda Hrženjak), which explores the intersections of care for the older adults and migration and the new international division of care work. In addition, we did a study Contact tracing in the European Union: Lessons to be learned for the future use of technology in tackling societal challenges (headed at the PI by Iza Thaler), which showed that in implementing contact tracing applications, Slovenia, like most EU Member States, failed to ensure that the operation of such applications was efficient enough to be justified and under appropriate public scrutiny. We also participated in the preparation of the report on poverty, which showed that Slovenia was one of the seven countries of the European Union where the at-risk-of-poverty rate increased in 2020 compared to the previous year (headed at the PI by Mojca Frelih). Within the politics pillar, we also researched political concepts, populism, intersectional discrimination and non-standard forms of employment. We concluded the POPMED project with an international conference, where we discussed how populist leaders are using social networks as new occasional structures for inciting hatred. As part of the project A break in tradition, we organised an international conference to discuss what kind of government is emerging at the beginning of the 21st century.

In public political responses, we protested against the violent eviction of the Autonomous Factory ROG and called on the city authorities in Ljubljana to provide its users with alternative premises; we drew attention to the intimidation by both neo-Nazi groups and the police in the area of the AKC Metelkova mesto; we supported the Museum of Madness, which was threatened with eviction from Trate Castle; we joined an international initiative Let’s abolish the system of private patents!, which advocates for the abolition of patents on COVID-19 vaccines and the dissolution of monopolies enabling private profits of pharmaceutical corporations; we supported the referendum campaign For clean drinking water; we demanded international protection and the right to settle in other countries for all persecuted individuals in Afghanistan, and a reflection on Slovenia’s role in NATO; we participated in the initiative of civil society organisations The voice of the people, which prepared a series of concrete demands for political parties before the 2022 parliamentary elections. We were also active in the field of protection of the rule of law in Slovenia. Among other things, our director Iztok Šori participated in talks with a delegation from the European Parliament, where he noted that the environment for the operation of NGOs has become highly hostile under the current government. The government and especially the SDS party are trying to curb the activities of non-governmental organisations by public slander, cuts in funds, destruction of basic infrastructure and legislative changes. One of the favoured targets of such destructive policy are the organisations residing at Metelkova 6 in Ljubljana; the Ministry of Culture has started an eviction process after a quarter of a century of working at this address, which we successfully resisted last year.

Within the human rights and minorities thematic pillar, we completed an important study on discrimination based on ethnicity, ‘race’, nationality and/or religion in Slovenia (headed by Veronika Bajt). The study found that discrimination is most common among those treated as foreigners by existing legislation and the majority population and is particularly prevalent among applicants for international protection and refugees, who also report experiences of ethnic police profiling. We posted online A human rights guide (headed at the PI by Iztok Šori), which helps individuals understand their rights and obligations and develop the ability to apply human rights in concrete situations. We also researched procedures for obtaining international protection, the problem of statelessness, the rights of defendants and victims in court proceedings, and the integration of immigrant women in the education system. We conducted several studies for the European Agency for Human Rights and cooperated with the national Ombudsman in the implementation of the tasks and powers of the National Preventive Mechanism. We prepared an infographic on the 29th anniversary of the erasure of people in Slovenia and conducted a successful donation campaign to cover the costs of representing those who have been living in Slovenia for decades without any status and have strived to regulate it; we demanded from the Government of the Republic of Slovenia to lift the constitutionally controversial measure banning the departure from the country; we proposed to the Ombudsman to investigate the use of coercive means at the protest on 5 October 2021, when police fired more than 400 gas rounds and gas bombs at protesters. In addition to research and numerous public responses, we organised several high-profile human rights events, including a debate on how the right to protest is being defended in Poland and France.

In the media thematic field, we completed a remarkably resounding projects headed by Brankica Petković: Protection of the supervisory role of civil society and journalists in Slovenia and BEHAVE – SEE beyond hate: Learning and acting to counter hate speech online in South East Europe. Among others, several infographics have been produced explaining hate speech accompanied by the online education of teachers on this topic. This year, we continue to investigate misinformation and hate speech in the media in the Western Balkans and Turkey. In our public responses, we supported Radio Študent, which was left without a good part of the funding; due to the encouragement of inequality, we reported the broadcast of Faktor (TV3) to the regulator of audiovisual media, which granted the complaint but imposed rather mild measures on the medium; we were also successful in complaining to the Ombudsman for viewers’ rights at the public broadcaster RTV Slovenia for abusing the programme for a promotion of the SDS party. We called on the Programme Council and the management of the RTV Slovenia to take professional and responsible decisions on programmes in 2022, as several changes have been announced that would curtail the news programme and trigger the disintegration of the public service. During the public events, we draw attention to the discussion on the experience of journalists and civil society in combating extremist, neo-Nazi groups, and the discussion on intimidation of female journalists across Europe, which we organised in collaboration with the Slovene Association of Journalists.

Within the gender thematic pillar, we embarked upon the project Preschool education and the role of masculinity (headed at the PI by Majda Hrženjak), researching the pedagogical practices of the official and covert curriculum in preschool education which influence the formation of gender stereotypes about care work. We also investigated occupational risks in sexual work and military families and continued with the project Action dad (headed by Mojca Frelih), spreading the idea of the importance of active involvement of men in parenthood through various media campaigns. We continued our efforts to adopt quality policies in the field of long-term care and gender equality.

The 2021 operation review of the Peace Institute makes us optimistic. After all, our work has been awarded several times over the past year. We received the 2021 Recognition for the promotion of peace, non-violence and human rights ‘Krunoslav Sukić’, awarded by the Croatian Centre for Peace, Nonviolence and Human Rights in Osijek. Article by Mojca Pajnik and Majda Hrženjak Engendering Media Work: Institutionalising the Norms of Entrepreneurial Subjectivities, published in the journal Journalism, was included in the selection of achievements Excellent in science 2021 by the Slovenian Research Agency. Our new colleague Tjaša Turnšek received the Professor Klinar’s Fund award for a master’s thesis in which she analysed media representations of refugees. Notwithstanding, we are entering 2022 worried and appalled. At the time of writing, the war in Europe is raging again. After thirty years, the topics and issues that gave birth to the peace movement on the soil of the former Yugoslavia and the Peace Institute itself are again coming to the fore. How will we democratise our society and the world? How will we eliminate inequalities that trigger conflicts? How will we ensure the right to conscientious objection and lasting peace? It is time to take up the 1991 Declaration of Peace again.