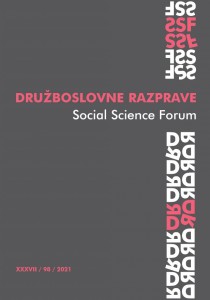 In the article titled Political and media populism in television political interviews, published in the latest issue of Družboslovne razprave journal, Emanuela Fabijan and Marko Ribać analyse populism as a style of communication that is reproduced through the media or reproduced by the media (i.e. by the journalists themselves). Authors examine the specificities of populist communication of politicians and journalists through visual interaction analysis in news interviews on the topic of migration in two primetime news television shows. Populism reproduced through the media is mainly focused on reinforcing fear of the Other, on highlighting the protection of Slovenia’s borders against the dangerous Other, and on visual representations of the people as a homogeneous national community. Populism by the media, the reproduction of populist rhetoric and its expressive style, can be comprehended through the role of journalists as popular tribunes who, using the mechanism labelled as “shift of footing”, act for and on behalf of the people.

The entire issue is available here while individual articles can be found here.