Living on a Border: Migration of Subversions

Living on a Border is a long-term, international research, policy and art project that deals with the migration issue in Europe – especially in the EU – and tries to demystify the migration phenomenon and clarify the situation in light of the fact that in public discourse migrations are usually understood as negative, threatening or conflictual. Such demystification and clarification is especially important due to the fact that in the last decade migration processes have been increasing throughout all of Europe (primarily in the EU) and the USA (the entire so called developed and prosperous, democratic and civilised western world). These processes are simultaneously a product of and a threat to their governments. The fear of foreigners – as foreign workers from “the East”; as “uncivilised terrorists”; as so-called “illegal migrants”; as representatives of so-called “third world countries” whose cultures and traditions are “too different from ours”; as a source of difficulties (except in the case when their countries are cheap tourist destinations or when they are cheap occasional labour power) – is a consequence of non-understanding or not being well-informed about their political, social, and cultural condition. It is a representation of a collapse of emancipatory politics as a politics of radical equality. Precisely there – having in mind that the radical politics of equality has no arche (i.e. is anarchical) – the origins of the deep institutional and latent xenophobia, nationalism, ethnocentrism, cultural (neo)racism and all other forms of exclusivity and discrimination that the contemporary society is facing with, should be explored more in details. Rethinking the traditional concept of borders and national sovereignty, the project should contribute to the active diversity – with understanding different historical, political and national backgrounds – on European and regional but also global level, as it tries to think beyond specific national concept; tries to open some questions of trans-national (universal) equality, wishing to debate some new foundations for (global) identification, beyond national belonging and national citizenship, showing the way to step beyond xenophobia and national exclusivity, to open new understanding of contemporary concept of equality and help achieve the intercultural dialogue that is also demanded in Universal Declaration of Human Rights.

The originality of the project is the idea to combine the (social, political) science approach with the artistic form and to show the results of the research process through a complex work of art – Permanent Waiting Room spatial multimedia art installation. The language of the spatial art installation with its events is used to make the project’s conclusions, facts and thinking of the subject more readable, understandable and approachable to a wide range of audience.When researching the phenomenon of migration in Europe, one of the most important issues is migration process from “East” to “West” so the view to this issue by the experts (theoreticians, researchers, artists) from the countries of Western Balkans / East European region is crucial, as well as the implementing the idea of the project to the selected region.

Project is produced and organized by the Institute of Art Production and Research Kitch, Ljubljana. 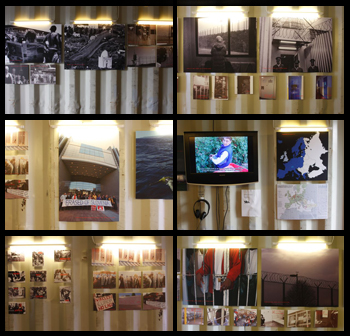