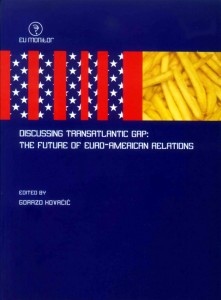 Discussing the Transatlantic Gap: The Future of Euro-American Relations

The aim of the book is to present various productive contributions to understanding the present transatlantic situation, considering the differences in political dispositions, reflections, traditions and expectations for the future. They will remain relevant regardless who are the exposed political protagonists in power.

Contents
Gorazd Kovačič
Introduction: The Transatlantic Debate Between Power and DeliberationDavid P. Forsythe
The U.S. and Trans-Atlantic Relation: On the Difference Between Dominance and Hegemony

Ulf Hedetoft
Different Empires: Regionalization vs. Global Hegemony in Transatlantic RelationsTomaž Mastnak
Hostes Humani Generis?Albert F. Reiterer
Soft Imperialism: European Identity, the Concept of the “Law of Peoples,” and the Political World SystemMaurizio Vaudagna
Citizenship, Welfare and the State in the Controversy over “the Widening Atlantic”
Share this article: