Peace Institute – Institute for Contemporary Social and Political Studies > Publications > Ours and Yours. On the History of Slovenian Newspaper Discourse of the 19th and Early 20th Centuries 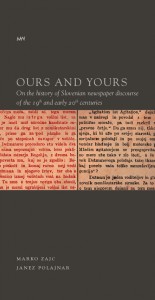 Ours and Yours. On the History of Slovenian Newspaper Discourse of the 19th and Early 20th Centuries

“The book consists of six chapters on Slovenian media history. All the subjects (censorship, political struggles, the economic crisis, the Balkans, folk songs and racism) are as topical today as they were at the time when they were discussed. What has changed then? Obviously, “time” has changed, since “space” is more or less consistent. And yet, this is only partly true. Symbolic-geographical space is like an accordion that stretches and shrinks under the pressure of historical change. Furthermore, topicality depends on writing style, among other things: by combining traditional historical analysis and a journalistic-literary style, we have tried to relativize the image of the contemporary media landscape and lend it a historical dimension. To achieve this, we quoted interesting passages from old newspapers whose archaic discourse illustrates the language of Slovenian journalism of the time. We hope that the book will be equally interesting for readers who are not well acquainted with this subject as well as for social scientists who study the contemporary media.”