Peace Institute – Institute for Contemporary Social and Political Studies > Publications > Populism and the Web: Communicative Practices of Parties and Movements in Europe 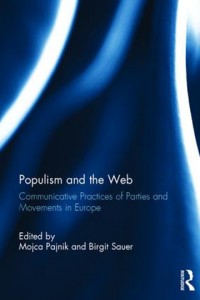 Populism and the Web: Communicative Practices of Parties and Movements in Europe

New book about the role of the Web for right-wing populist political parties and movements across Europe edited by Mojca Pajnik and Birgit Sauer (Routledge).

The Web plays an increasingly important role in the communication strategies of political parties and movements which utilize it for promoting ideas and ideologies as well as mobilization and campaigning strategies. This book explores the role of the Web for right-wing populist political parties and movements across Europe. Analysing these groups discourses and practices of online communication it shows how social media is used to spread ideas and mobilize supporters, whilst also excluding constructed “others” such as migrants, Muslims, women or LGBT persons. Expert contributors provide evidence of a shift in the strategies of mainstream parties as they also engage in “internet populism” and suggest ways that progressive movements can and do respond to counter these developments. Topics are explored using a cross-country analysis which does not neglect the particularities of the national contexts.

“This excellent book links the origins of contemporary populism to the erosion of democratic institutions, and shows how the rise of populist parties on the radical right further threatens democracy across Europe. A common theoretical and empirical framework gives the book a rare unity of argument and analysis seldom found in edited volumes. The focus on how these parties use digital and social media to communicate directly with large publics helps explain the rapid rise of the radical right in so many democracies. This book is a must read for everyone concerned about the disruption of communication and political institutions in contemporary democracies.” – Lance Bennett, University of Washington

“Drawing on insights from a great variety of European countries this book provides a comprehensive yet detailed account of populist discourses and practices in online media. Given the centrality of online communication in current mediatized democracies, the volume is a much-needed addition to the literature on media and populism and among the very first to provide a systematic account of how populist parties and movements make use of the web. The contributions range from comparative analysis with a focus on the participatory potentials of online communication to detailed depictions of different exclusionary discourses. The book ends with an important chapter on strategies to counter populist discourses. On the whole the volume is an indispensable read for any scholar working on the intersection of media and populism.” – Hajo Boomgaarden, University of Vienna

From forward by Gianpietro Mazzoleni:

“This book, collecting a number of insightful studies on many facets of the populist phenomenology from the perspective of the new media, is an outstanding example of the renewed scholarly effort. I think this is a major step forward in understanding populist dynamics beyond the domain of established mass media. Interactive media provide a crucial tool to populists to bypass the gatekeeping of the traditional news media, allowing them to address citizens directly, to mobilize public opinion, to set the agenda of large portions of the citizenry and of the mainstream media themselves.”

From introduction by Ruth Wodak:

“The volume explores a most important and ambitious question asked by many journalists, scholars, politicians, spin doctors, and laypeople alike: Is it at all possible to distinguish between the democratic and participatory use of the Internet and its abuse/misuse due to the spreading of discrimination and hate? Thus, the chapters in this book investigate both hate speech and counter discourses, that is, strategies that challenge right-wing and radical-right populist exclusionary rhetoric and provide possibilities of online emancipatory mobilization against hate speech online.”

Foreword: Populism is better Understood in its Relation with the Media
Gianpietro Mazzoleni

Populism and the Web: An Introduction to the Book
Mojca Pajnik, Birgit Sauer

Media, Politics and Democracy: Populist and Post-populist Europe in the Mirror of the Italian Experience
Giovanna Campani

From Anti-Europeanism to Welfare Nationalism: Populist Strategies on the Web
Ildiko Otova and Heini Puurunen

Anti-Migration and Islamophobia: Web Populism and Targeting the “Easiest Other”
Denitza Kamenova and Etienne Pingaud

Perceptions of Gender: the Discourse of the Far Right on the Web
Gabriella Lazaridis and Vasiliki Tsagkroni