Peace Institute – Institute for Contemporary Social and Political Studies > Publications > The Rhetoric of Refugees Policies in Slovenia. The Pragmatics of Legitimation 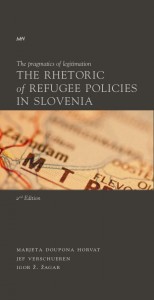 The Rhetoric of Refugees Policies in Slovenia. The Pragmatics of Legitimation

“Words also have their own history and meanings independent of those we are willing to ascribe to them. Some time ago, the Republic of Slovenia, which is supposedly a social state governed by the rule of law, and a state that signed (all?) international conventions on the protection of human rights and refugees, established the Center for the Removal of Foreigners. For those whose blood has not boiled at the reading of these words, or who find such a choice of the name completely natural, let me explain a few things: usually one removes pests, dirt, rubbish and waste, then stains, fruit skins and stones, but also tumors and other useless ‘parts’ of the human body. In short, we remove things that are not only redundant or obstructing our way, but we also want to get rid of them beyond any doubt and once and for all. One could almost say that we want to eradicate them from the face of the earth. Societies that consider themselves civilized, or want to be seen as such, usually do not remove people. Somehow it appears bad taste, and it has also been highly unfashionable/unpopular at least since the end of the WWII – to name only two reasons in case nothing more essential or rational has come across your mind. No doubt many criminal organizations deal in removal of people, but governments, at least most of them, do not belong to this type of organization or at least they do not want to. The unwanted foreigners are usually ‘deported’, a (legal) term that has been widely in use implying a forced departure from a country. After all, they could as well be returned or turned back, or something like that. However, removal suggests that the most likely places they could be found after such an act is dustbins, sewers, or even some free floating fumes. ” (Ljubljana, 10 September, 2001, Igor Ž. Žagar)
Share this article: