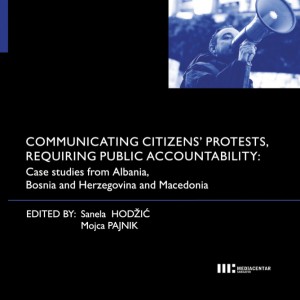 Over the last several years, the region of South-East Europe witnessed quite a few largescale protests in which citizens demanded government accountability and expressed their discontent. While protests were not that rare before – small-scale citizens’ protests in particular were almost a constant in some parts of the region – the protests that have taken place after 2013 involved a wide range of communication opportunities and challenges pertaining to their focus, scale, range of participants, the overall socio-political environment, but also the changing technological environment and media use.

The aim of this publication is to examine the communication practices during recent cases of protest, recognising that communication is relevant not only in terms of the construction of a symbolic realm but mostly in its impact on actual mobilisation and the politics of social movements. The research reflects on communication practices during various civic initiatives, including social uprisings in 2013 and 2014 (in Bosnia and Herzegovina), protests focused on specific issues, such as pollution, reproductive and labour rights (in Macedonia), dismantling of chemical weapons and student protests (in Albania).

Ilda Londo
BETWEEN MAINSTREAM AND SOCIAL MEDIA: Communication practices during the protests in Albania

Tijana Cvjetićanin
“REVOLUTION AS THE ONLY SOLUTION”: Communication practices during the protests in Bosnia and Herzegovina