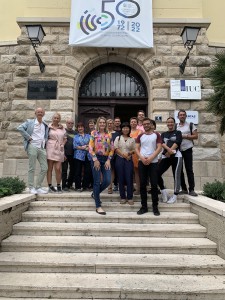 From September 5 to 9, a seminar entitled War, Politics and Ideology was held at the International University Center in Dubrovnik as part of the Identity of Europe course. Five collaborators of the project Break in Tradition: Hannah Arendt and Conceptual  Change  participated in the event with papers.

After the peace agreement that ended violence in the war in Bosnia and Herzegovina which erupted exactly thirty years ago, and had far-reaching consequences for the region, Europe, and the post-1989 world, no one believed that such a thing could  happen again “in Europe”. With 2022 Russia’s attack on Ukraine and the destructive war waged by this nuclear power, all political, legal and moral standards developed after World War II in favor of a peaceful and just world order are questioned again: international law, human rights, the non-use of weapons of mass destruction and the slogan “never again”.

The course offered the opportunity to examine processes of political, social and military transformation in Europe taking place in the face of a new war. Participants presented papers  on similarities and differences with historical events, discussed the issues of diplomacy, peace politics and the role of truth, lies and propaganda, and, among other things, attempted to rethink the importance of strong civil society and its eventual peace building role.

On the first day, in his paper Against the Tyranny of Truth Greg Yudin (Moscow School of Social and Economic Sciences/Princeton University) offered us a reflection on Russian war propaganda and why is it successful among several publics, by pointing to the fundamental misunderstanding of the relation between truth and politics. Aleksander F. Filipov (Higher School of Economics, Moscow) spoke about The two ethics in Arendt and the imaginary wars while differentiating between ethics of glory and ethics of silent resistance. In his paper, The War on Liberal Satan, Zoran Kurelić (University of Zagreb), analysed the anti-liberal and eschatological aspects of political theology in G. Agamben and A. Dugin’s writings.

On the third day, Vlasta Jalušič (Peace Institute Ljubljana) addressed the concept of war in the Western political tradition with the  paper Krieg, Krise, Kritik: Towards Perpetual Crisis. Ajla Čustović (University of Zagreb) spoke about the concept of Jihad, its Meanings and Consequences while developing a multi-dimensional and progressive interpretation within Islamic thought. Rafael Kasper (UFRGS Porto Alegre) presented an insightful Berlin Anti-war tour with the  Remarks on the pedagogical possibilities of historiography and sightseeing.

On the fourth day, Waltraud Meints-Stender (University of Applied Sciences Niederrhein)  analysed the concept of solidarity in her paper Against imperial forms of life. Political Judgment as a practice of solidarity.  Iana Lepetiukhina (RWTH Aachen) spoke about Abstract and Concrete Emotions in Times of War while leaning on observation that people stopped communicating since the outbreak of recent war in Ukraine. Lana Pavić, (University of Zagreb) presented the paper Between War and Politics: How the Concept of Refugee is Redefined. Ringo Rösener  (University Leipzig) presented his topic in the frame of arts: Photography in Times of HIV/Aids — A Fight with the Means of Art?.

On the last day, Mirt Komel  (Peace Institute and University of Ljubljana) reflected on Thucydides’ conception of War and Politics, particularly his adage that “The strong do what they can and the weak suffer what they must, while showing the missing part of this famous citation. Jiae Han (PHD candidate at the Free University Berlin) tried to think of  What the Arendtian concept of political agency means for North Korean defectors as pariahs: new interpretation and limits, while Zlatan Krajina reflected on  the Post-1989 Balkan/Europe conjuncture as communication between centre and periphery.

All contributions stimulated interesting and exciting discussions, while conceptual considerations helped to frame actions and events in the current war in Ukraine. Alongside the seminar, the last project meeting of the collaborators of the research The break in tradition: Hannah Arendt and conceptual change was held, with planning publications and further cooperation.