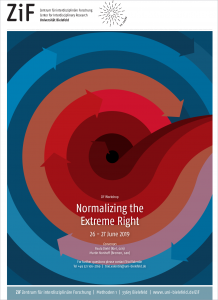 »From the most obvious case of the Trump presidency in the US and the success of right-wing populist parties in Europe to the election successes of right-wing extremists and populists in Brazil or in India, there is a worldwide trend to construct homogeneous peoples at the danger of disregarding – and often threatening in word and deed – democratic principles such as plurality, equality, and human rights. Migrants, Muslims, Jews, homosexuals, feminists, etc. are under attack. At the same time, right-wing populist governments step by step restrict liberty of the press, change police and migration laws, and intervene in political culture by promoting a homogeneous image of the people, by manipulating history and collective memory, or encouraging racist, anti-feminist and anti-homosexual resentments.«

These were some of the starting points of the international conference »Normalizing the Extreme Right« that was organized at the University of Bielefeld, June 26-27, 2019. Birgit Sauer presented a paper entitled „Radical right-wing populism as male identity politics?“, while Mojca Pajnik was a reviewer of a paper on processes of ethno-nationalization in Central-Eastern Europe, focusing on the case of Hungary, and a paper on the influence of right-wing and extreme right-wing politicians on citizen’s attitudes.