Peace Institute – Institute for Contemporary Social and Political Studies > Publications > Imagi_nation. Civil Identities and Rights in European Nation-States: Securing the Rights of Migrant Workers as a Contribution for Sustainable Peace-Building 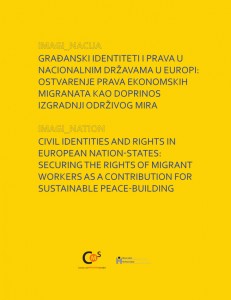 Imagi_nation. Civil Identities and Rights in European Nation-States: Securing the Rights of Migrant Workers as a Contribution for Sustainable Peace-Building

This publication presents several insights into the mechanisms and procedures that form national identity and examines how they affect the broader political processes that shape democracy.

The texts presented here also examine the idea of the border (physical) between two states, but also symbolic as an  expression of “otherness”), both as an essential feature of contemporary nation states and as the location where national belonging is materialized and bureaucratized (e.g., in the form of passports and visas, allowing or forbidding entry). They question how contemporary “developed” states close their borders because of neoliberal pressures, and how this is presented as an attempt toward off economic migrants, when in actuality this act produces and maintains the illegality of a cheap workforce, which establishes a clear link between the nationalization of societies and a growing class divide.

Tamara Puhovski:
Ethnos and Demos as the Origins of Identity in Europe: Europeans Born and Raised

I. Citizenship: Identity Ascertained By Passport

Mojca Pajnik:
The Impossibility of Social Citizenship: On the Statelessness of Migrants

Peter Klepec Kršić:
A Lesson for Emancipatory Politics from Psychoanalysis?

Gorazd Kovačič:
Yael Tamir’s Liberal Nationalism: Practical Shortcomings of the Theory in the Context of an Anti-Liberal Majority

Lev Kreft:
Walking the Streets of My Town: Ljubljana as Embodiment of the Slovenian National Narrative

Mitja Velikonja:
The Past with a Future: The Emancipatory Potential of Yugonostalgia

III. The Erased Citizens of Slovenia: A Case Study and Civil Efforts Towards Recognizing Rights

Uršula Lipovec Čebron:
A Short Introduction to the “Erasure”: Six Questions and Answers About the “Erased” Citizens of Slovenia

Lana Zdravković:
The Struggle Against the Denial of Citizenship as a Paradigm of Emancipatory Politics