Peace Institute – Institute for Contemporary Social and Political Studies > Publications > Media Policy in Slovenia in the 1990s. Regulation, Privatization, Concentration and the Media 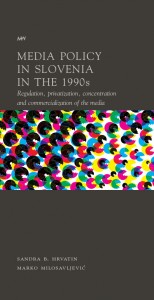 Media Policy in Slovenia in the 1990s. Regulation, Privatization, Concentration and the Media

During the 1990s the Slovene media were significantly affected by political changes. The events that most influenced the media world of the nineties were the introduction of the new media law (arguments and discussions about the media law in Slovenia have again become topical ten years later), the privatization of the media, liberalization of the print media market and superficial regulation of the broadcasting market, media monopolization and commercialization. These events are the subject of the analysis in this essay.

The Slovene media market is small, so relatively modest financial resources suffice to establish control over it (especially in comparison with the sums involved in the takeovers and acquisitions in other European countries). Before the process of media privatization got underway, the Slovene state expected the invasion of large European and American corporations, similar to what has happened in some other countries in transition. One decade later it is possible to conclude instead that a small number of local owners with stakes in numerous affiliated companies control the major part of the Slovene media market. The concentration is still in progress, while cross-ownership ties remain unchanged. It is obvious that the state, or rather its supervising institutions, do not have any mechanism (and no interest) to introduce order into this field.