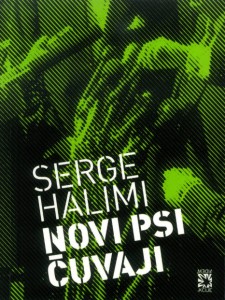 Serge Halimi is an editor of the French monthly Le Monde Diplomatique. In his review of this book, Boris Čibej wrote that »in this deadly critique of modern journalism [Halimi] dissects with precision the discourse of French television, radio and the press«, but »his analysis also exposes general trends in ‘western’, ‘capitalist’, ‘market-oriented’ journalism.« The book is an »exemplary study of the influence on the media exerted by ownership and capital.« Halimi »illustrates close links between the politics and leading journalists as well as the virtually incestuous relationships among the leading French journalists.«
Foreword by Rastko Močnik, co-publisher Maska. The book can be ordered from Maska, Metelkova 6, Ljubljana.
Share this article: