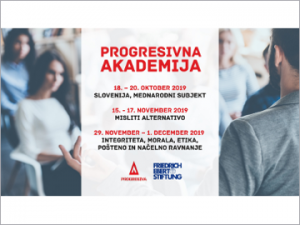 Iztok Šori and Emanuela Fabijan participated in a conversation on populism at the seminar of the Progressive academy entitled Slovenia, an international subject (Ptuj, October 19, 2019, organized by Friedrich Ebert Stiftung Zagreb and the Progressive Society). They presented the main theoretical approaches to defining political and media populism and preliminary results of the parliamentary discussions’ analysis on migration-related laws which have been passed between 2015 and 2019. The analysis revealed differences and similarities in framing migration by different political parties, and consistency in discourses of coalition parties and two opposition parties (SDS, NSi). The later is visible in prevailing framing of migrations as a security threat and calls for militarization. In parliamentary discussions we also detected a discourse that warns from the instrumentalization of migrants, criticizes the rhetoric of fear and calls for respect of human rights.