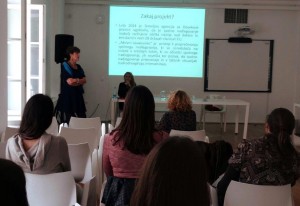 In November 2018 we finalized the project ‘Developing Bystander Responses To Sexual Harassment Among Young People’.  The project proceeded from the fact that in 2014 the sexual harassment was found to be the most prevalent form of violence against girls and women across the 28 EU member states (report of Fundamental Rights Agency). Over the two years we worked on developing a new approach to the prevention of sexual harassment which is targeting young people as bystanders, inviting them to notice and intervene in sexual harassment situations. The partners in Portugal, Slovenia, United Kingdom and Malta developed, piloted, implemented, and evaluated a school-based programme for bystanders to prevent sexual harassment in high-schools. Twelve schools were involved in the project altogether, three in Slovenia, in which our  partner DNK (Society of non-violent communication) was working on the implementation. In October 2018, we organized the final national event in Ljubljana and presented the preliminary results to the wider public.

The four key findings and results of the project for Slovenia are the following:

The Slovenian country report in English and Slovenian will be accessible soon at the Bystanders project website  where you can also find more information about the project and its implementation in all four countries: http://www.bystanders.eu.