The book ‘Prostitution in Croatia and Slovenia: Sex Workers’ Experiences’ 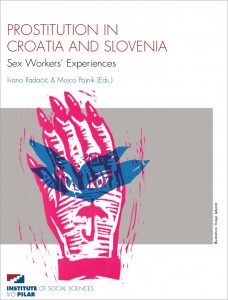 The book Prostitution in Croatia and Slovenia: Sex Workers’ Experiences (edited by Ivana Radačić & Mojca Pajnik) has recently been published by Institute of Social Sciences Ivo Pilar and the Peace Institute.

The book thematizes the similarities and differences in prostitution regimes in two post-socialist countries in which prostitution is a tabooized and marginalized topic, both in public debate and in research. The chapters in the book analyze the framing of prostitution in the law and public discourse, with the focus on the narratives of sex workers. By discussing sex worker’s experiences and opinions obtained through the interviews, analysing interviews with some experts and based on extensive literature the chapters address policies in the field of prostitution, life processes and work of sex workers, their relationships with clients, the police and pimps. At the same time, the book provides recommendations for the design and implementation of policies that will take into account the voices of sex workers as well as good practices advocated by some international organizations working in the field of sex workers’ rights.

“The monograph is an original scientific work based on an inclusive research which, by giving voice to subjects of research, has enabled researchers to cross the limits of established knowledge and contribute to new views on prostitution and sex work, and has opened the field of reflection in science, research, social movements and policies.” – Vesna Leskošek, Faculty of Social Work, University of Ljubljana

“This edited volume is the first systematic socio-legal study of sex work in Croatia and Slovenia. It not only complements the existing public health (Croatia) and sociological (Slovenia) insights about the phenomenon in the two countries but provides a rich sociocultural and socioeconomic context of the experience of sex work / prostitution for future research. (…) In the context of international research, the book should be consulted for systematic and instructive insights into the phenomenon of sex work in a post-transitional European region.” – Aleksandar Štulhofer, Faculty of Humanities and Social Sciences, University of Zagreb

“Academics, activists and sex-workers will find this book informative and thought provoking regardless of their pre-conceived beliefs about prostitution. While ideological positions which represent sex work as either forced or freely chosen often frame prostitution research, the research which underpins this book avoids such simplistic dichotomies. The authors offer a nuanced qualitative analysis of sex-work law, policy and experiences in Croatia and Slovenia, two EU states where evidence-based policy making on sex-work is sorely lacking.” –  Carol Harrington, Victoria University of Wellington

“Prostitution in Croatia and Slovenia is a must read for anyone wanting to learn about sex work in the Balkans. It is a much needed book in light of the marginal status of sex work research, and dearth of official data and studies of sex work in both these countries (…) It is refreshing to read a book attempting to move ‘beyond the binary’ of theoretical approaches (…) in an attempt to foreground the lived realities of people who sell sexual services in Croatia and Slovenia. Another strength of the book is the production of research knowledge which is policy relevant; the authors make a range of recommendations informed by their findings and make a case for future polices and service provision which is informed by the needs of sex workers and are inclusive of sex workers’ own experiences and views.” – Rosie Campbell, University of Leicester and University of York

The price of the book is 20 euros. To order please contact: Mirjana.Paic-Jurinic@pilar.hr

Book launch in Zagreb
We first presented the book Prostitution in Croatia and Slovenia: Sex Workers’ Experiences (Eds. Ivana Radačić & Mojca Pajnik) at the international conference in Zagreb on 17 November 2017. In the introductory lecture, Eilis Ward addressed the dilemmas and controversies in the field of research into sex work, while Trajche Janushev talked about the experiences of the Sex Workers’ Rights Advocacy Network in addressing violence against sex workers. The book reviewer, Alexander Štulhofer, emphasized the importance of the book in the context of both countries and beyond. Topics from the book were addressed by book authors Ivana Radačić, Mojca Pajnik, Lynette Šikić Mićanović, Emanuela Fabijan, Stephanie Stelko and Mojca Frelih.