The Anti-Hate Speech Council operates as an independent body of 9 socially engaged individuals, who share the goal of opening up public debate about hate speech in Slovenia. In its second public reaction, published on 24 June 2015, the Council focused on five different cases. Three of these were reactions to social media publications; one to a Tweet by a public figure, one to a public Facebook page posting of a public figure, and one to a public Facebook group page that contains homophobic rhetoric and aggressive promotion of hatred towards people of different ideological or political beliefs. In all three cases, the Council condemned the rhetoric and in the public Facebook group case advised the administrators to withdraw posts containing discriminatory and hateful comments, as well as to moderate the postings in terms of preventing hate speech. On the public’s demand to  react, the Council also responded to a comment made on national television by the renowned philosopher Slavoj Žižek in the aftermath of the Charlie Hebdo attacks. The object of his rhetorical attack were the world’s leading politicians, who have access to ideological and repressive levels of power and therefore cannot be treated the same as a disadvantaged social minority. The Anti-Hate Speech Council assessed that, despite the radicalism of public speech in question, the context of the utterance was crucial for not classifying it as a case of hate speech. Yet the Council nevertheless noted that any public calls for killing should be treated as unacceptable, adding a contextualizing caricature to its public reaction. Finally, the Council also gave its support to the proposed amendments to the Media Act in the part concerning regulating hate speech in online fora as well as in anonymous commentaries published by digital media. 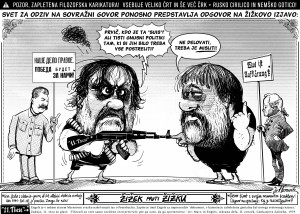 Stemming from its already established practice that was announced in the Council’s first public reaction on 17 March 2015, an additional criterion has hence been introduced in order to respond to the growing number of reports concerning digital media. The question of when and how to publically react follows a detailed examination of each suggested case. Firstly, the Council examines whether the reported incident is directed against minorities (i.e. the underprivileged, marginalized vulnerable groups in society that are not in a position of social power). Secondly, is the message disseminated from a position of social power and public influence? Thirdly, what is the context and purpose of the message, and does the group under attack also hold the same tools to protect itself and respond to the attacks publicly? As the fourth point in the examination process, the cases that meet the first three criteria are then further examined by the Council and considered for a public reaction. A new, fifth, criterion was added in order to address a growing number of new reports coming from the public: the Council has therefore decided to also consider items that are posted on social media networks (Twitter and Facebook) but only if posts are made by public figures, organizations and institutions, whose statements have a wider public range and impact.

The public responses of the Anti-Hate Speech Council are available here (in Slovenian):
https://www.mirovni-institut.si/drugi-odziv-sveta/