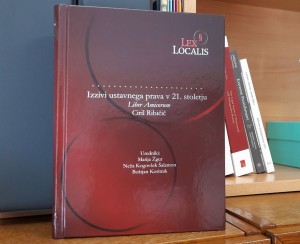 The monograph Constitutional Law Challenges in the 21st Century, co-edited and co-authored by dr. Neža Kogovšek šalamon, Director of the Peace Institute, is dedicated to Professor Ciril Ribičič on the occasion of his 70th birthday. Nineteen eminent Slovenian and foreign scholars discuss topical issues from the field of constitutional law. Introducing the monograph are three short letters to the Professor in which their respective authors ponder on selected important issues that have marked the recent past and pose a challenge to the future of international constitutional law. The main body of the book is divided into three parts. In the first part, different problems regarding the form of government, the political system and elections are confronted. The second part is dedicated to contributions that critically address some of the most pressing issues facing Slovenia and its wider international surroundings in the field of human rights and constitutional democracy. In the third and last part of the book we find articles analysing the role of constitutional justice in the context of contemporary constitutional democracy which transcends the boundaries of domestic law and is crucially dependent upon supranational judiciary bodies.