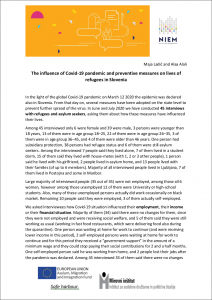 In the light of the global Covid-19 pandemic on March 12 2020 the epidemic was declared also in Slovenia. From that day on, several measures have been adopted on the state level to prevent further spread of the virus. In June and July 2020 we have conducted 45 interviews with refugees and asylum seekers, asking them about how these measures have influenced their lives.

Large majority of interviewed people (35 out of 45) were not employed, among those all 6 women, however among those unemployed 12 of them were University or high-school students. Also, many of these unemployed persons actually did work occasionally on black market. Remaining 10 people said they were employed, 3 of them actually self-employed.

We asked interviewees how Covid-19 situation influenced their employment, their income or their financial situation. Majority of them (34) said there were no changes for them, since they were not employed and were receiving social welfare, and 5 of them said they were still working as usual (working in fast food restaurants, which were delivering food also during the quarantine). One person was waiting at home for work to continue (and were receiving lower income in this period), 2 self-employed persons were waiting at home for work to continue and for this period they received a “government support” in the amount of a minimum wage and they could stop paying their social contributions for 2 and a half months. One self-employed person said he was working from home, and 2 people lost their jobs after the pandemic was declared. Among 45 interviewed 33 of them said there were no changes in their financial situation, 4 people said they were receiving the same income as before, and 7 people said their income lowered during the pandemic (between 20% and 50% less). One person said he was about to sign working contract but due to Covid-19 it was canceled.

Majority of interviewed people (25) said they received the information regarding Covid-19 and preventive measures on time and also in a language they understood (English, Arabic, Persian for example) through the Government Office for the Support and Integration. 14 people said they received at least some information but not in their language, and 6 of them said they didn’t receive enough information. Majority of interviewees said they would especially need more information about the changed medical system because they felt lost. Luckily none of the 45 interviewed persons needed any urgent medical care during the epidemic, however 4 of them didn’t have access to Covid-19 test when they suspected they might be infected, and several people said their appointments (especially dentist’s appointments) were cancelled.

When it comes to education, for 12 people nothing changed because they were not studying and they don’t have children in school. For the rest (33) things did change, either for themselves or their children. The education process was interrupted (either lectures, courses or school), it took people quite some time to adopt to the new system especially due to lack of knowledge or skills in using technology (parents not computer literate), language skills (unable to follow online learning if not fluent in Slovene), strict timing of online courses (which lowered the possibility of communication between the students and teachers). Majority of people said they or their children were learning from home and were getting assignments online. Assisting their children and learning online was difficult also due to the low level of parent’s education (not being able to assist their kids with school work). One of the biggest obstacles however was the difference in level of language skills between children and parents – in all our cases children speak better Slovene than parents, but still not enough for them to learn alone without any assistance. Several people said they would need more help and assistance during the quarantine period. For everyone attending Slovenian language classes there were changes during the epidemic. Classes were cancelled and they only had a few meetings online with their teachers. The duration of the courses was even compressed after the quarantine. Majority of people was not attending any vocational training so there were no changes for them. Only 3 people did attend vocational trainings and they were stopped during the quarantine but not cancelled; they continued when it was possible again.

For several people also their housing situation influenced on learning from home. Everyone said their living costs went up, because they were at home all the time, however majority of people said their rent and housing situation didn’t change. In 8 cases the rent got reduced (1 person said 100 eur reduced, and 2 people did not pay rent in April at all), in 3 cases people had to move because the rent went up or they could not afford to pay the rent anymore, and in 1 case the person stopped receiving the housing support from the government (which is maximum for 3 years) so it became more difficult right in time of Covid-19.

From 45 interviewed, 13 people said there were no changes in their nutrition during the epidemic, however for majority of people the situation did change; they had to cook more, they were eating more, many people didn’t eat balanced diet and gained weight. The nutrition became an issue mostly in families where women spent most of their time in the kitchen.

Around half of the people said they did not need to arrange formalities during the quarantine time, while the other half said it took them some time to figure out how to arrange something online or over the phone. Basically all formal issues in this period of Covid-19 were either supposed to be arranged online or were postponed. However, one person said he couldn’t reunite with his family in this period.

Around one third of interviewed people said they had no major issues during the quarantine, while more than half of people said the situation of Covid-19 had big influence on their relations (for example 3 people separated from their partners and conflicts between partners increased), several people were facing mental problems, depression or just having a difficult time staying at home for so long, while some others had financial issues because of Covid-19. Several people said they would need more information and daily updates on Covid-19 especially on the changed medical system in the sense of postponed or cancelled appointments, how to get dates for new appointments, etc. Some people said they would need psychological help but didn’t get it, some people mentioned they would appreciate protection kits or face masks at least. Some people needed financial help; others didn’t get information on volunteering options during quarantine. One person said he needed assistance with searching for a new apartment; another person needed to arrange the application for University and got no support. Before the pandemic a lot of children were receiving some kind of study-help which was not available during the pandemic when kids would need it most.