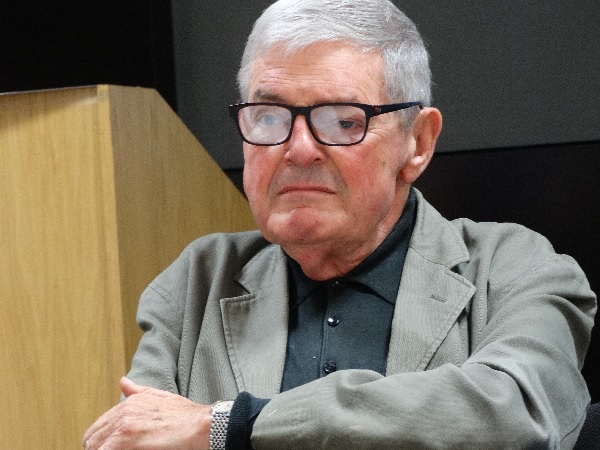 Peter Preston believed in journalism and international cooperation, and struggled to close the divide between Western and Eastern Europe regarding the conditions of journalism and the respect for its achievements. He was among the initiators, as well as a driving force behind the European Press Prize.

Peter Preston practiced public interest journalism and acted as its staunch advocate. He shared his knowledge and convictions selflessly in Slovenia and, more broadly, throughout the territory of Central and South-Eastern Europe.

A former editor of the Guardian and co-director of the Guardian Foundation, he made numerous contributions, spanning two decades, which helped raise awareness of the significance of free and professional journalism in Slovenia and other countries of our region.

He contributed to the Media Watch program, run at the time by the Open Society Institute – Slovenia, by writing an op-ed piece for one of the earliest issues of the Media Watch journal. The article, published in 1998 and titled “Vigilance for a Common Cause”, stressed how important it was for editors of European media to share information on the state of media freedom. “If we are aware of what’s happening,” Peter wrote, “of how bad ideas transcend borders, then we will be aware of what to fight.” A year later, in June of 1999 in Ljubljana, he took part in a journalistic evening debate on investigative reporting. In 2004, four years after the program had been taken over by the Peace Institute, he took part in an evening debate on editors-in-chief. During the same period, he contributed an article to the March/April 2004 issue of Media Watch, titled, “How to report a new European Union?” On that occasion, he wrote, “The European Union can transform many things: a country’s security, economy, sense of its own destiny. But do not expect too many simple media transformations. There’s no prescriptive pattern for media development inside the old, smaller Union. It won’t be any different when Slovenia and the other nine are on the inside looking out.”

In 2003 and 2004, together with Ian Wright, Guardian’s former managing editor and co-director of the Guardian Foundation, Peter supported a research project on media ownership in 18 post-socialist European countries, conducted by the Peace Institute and the South East European Network for Professionalization of Media.

During a more than fifteen-year period of collaboration between the Guardian Foundation and the Peace Institute, Peter and Ian organized more than twenty study visits of Slovenian journalists and editors to the Guardian, and visits of Guardian editors to Slovenian media outlets and media conferences. Most recently, in 2017, Peter assisted in bringing John Vidal, Guardian’s legendary environment editor, to Ljubljana, to run a workshop for the Slovenian Association of Journalists on environmental journalism. The workshop proved hugely impactful.

Peter believed in journalism and international cooperation, and struggled to close the divide between Western and Eastern Europe regarding the conditions of journalism and the respect for its achievements. He was among the initiators, as well as a driving force behind the European Press Prize. He was deeply committed to the competition founded by several European media, and enlisted the help of the Peace Institute and its regional connections to ensure wide participation of journalists from all European countries. His main concern was highlighting the achievements of journalists from countries traditionally passed over by such initiatives.

In recent years, Peter took part in the Peace Institute’s regional activities, aimed at researching and advocating for media freedom and integrity in the countries of South-Eastern Europe seeking to accede to the European Union. He took care to include Guardian’s best journalists and editors in the activities and efforts to strengthen investigative reporting and media freedom in the Balkans and Turkey. Under the South-East European Media Observatory project, conducted between 2012 and 2016 by the Peace Institute and its partnering organizations, Peter helped conceive and organize a seminar for the region’s investigative media. The seminar took place in Zagreb in November of 2013, and at the Guardian’s London offices in September of 2015. Following the seminar, Peter wrote an article for the Observatory, which read, “At its core, the future of journalism is the future of journalists themselves. (…) Journalism won’t make you rich – especially in the Balkans. Journalism may put you or your family at risk. Journalism offers no proper career structure. But journalism is also fundamental and necessary. Without it, there is no proper freedom. Which is why, come what may, it must and will continue. Those cross-border alliances aren’t coincidental developments. They are a natural response to the globalisation of crime (and much else besides). They are journalism’s reaction to a changing world.«

In his final column, which was published on New Year’s Eve 2017, Peter outlined, for the last time, what he envisioned for journalism and journalists – “becoming a functioning part of society rather than commentators at its edges”.

Peter Preston was devoted to practicing and advocating for journalism as a public service. He saw in journalism and journalists a cross-border, global force defending freedom and humanity. This is his legacy, and stands as a reminder to his colleagues at the Guardian and to the rest of us who worked and shared these values with him.