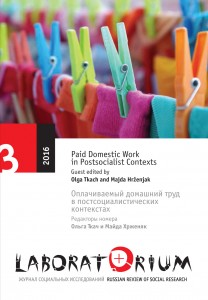 The view on female migration related to paid domestic/care work in private sphere as a move from East to West has become mainstream both in thematic choices of researches and everyday perceptions. This special issue aims to broaden the knowledge about paid domestic labour by researching this globally significant phenomenon outside the usual context of the studies of East–West care drain, following a question how it has been arranged in some countries of Central and Eastern Europe (CEE) and the former Soviet Union. Authors look at paid domestic labour ”from behind the care curtain of Europe”, from the perspective of the countries that began their transition to capitalism not long ago.