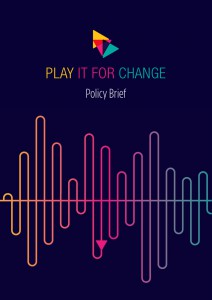 Play it for Change is a European project aimed at raising awareness and empowering girls and boys for the prevention of gender-based violence through music and audiovisual media. Following two years of implementation in schools in six different countries (Catalonia (Spain), Croatia, Slovenia, Poland, Greece and Cyprus) we have identify some fundamental principles for the empowerment and involvement of adolescent girls and boys in taking action for gender equality, as well as the challenges and needs of teachers for the prevention of gender-based violence.

“It is important to identify the specific ways in which sexism and gender-based violence are currently in force, but prevention strategies must be under the trends and characteristics of today’s society. Considering the audiovisual and music culture in which adolescents are involved, innovative methodologies of prevention through music and audiovisual media emerge as a powerful possibility.”

“One of the most notable issues that emerged as an obstacle in the promotion of equality and the prevention of genderbased violence was the lack of teacher training and resources in relation to gender, gender-based violence or LGBTI rights. Most teachers in schools had never received specific training on the above-mentioned topics. “