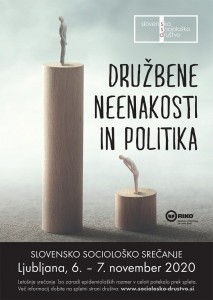 At a sociological meeting taking place online (6th – 7th November), we presented the results of a survey on populism, the media and migration. We analyzed populism as a phenomenon of “affective governmentality” with which the populist right dismantles state and institutional structures, creates an antagonistic vision of the world, deepens inequalities and demonizes minorities.

This article starts from the premise that the democratic struggle over (state) power consists not solely of an exchange of rational arguments, but is inherently affective and emotional. The right-wing populist and nationalist emotional discourse can yield political capital from spreading fear, but also through antagonistic distinctions between the ‘common sense’ of the people, i.e. ‘us down here’, the hardening and coldness of the political class, ‘those up above’, and the ‘Others’, i.e. migrants and refugees, who are untrustworthy or threatening. These discourses accelerated across Europe, including Austria and Slovenia, two countries at the middle-north of the so-called Balkan route of migration, after the ‘summer of migration’ in 2015. The overall aim of this article is to analyse and theorize right-wing national populist mobilization and communication strategies with a perspective on affective governmentality. Which affects have right-wing national populists mobilized in Austria and Slovenia since 2015 when both countries adopted emergency legislation curbing the rights of migrants? How are populist antagonisms (such as anti-elitism, people-centrism and Othering) modulated by affects? How do parties create an exclusive and exclusionary affective atmosphere? And to what kind of governing people and governmentality does the affective charging of populist antagonisms lead?

Presentation continues to develop early arguments of Paul Taggart (2000) on the “chameleonic nature” of populism and shows that populism manifests itself according to the institutional framework and prevailing principles and mechanisms of differentiated (national) social fields. Author of the presentation conceptualises populism as a primarily communicative or discursive (i.e. rhetorical) manifestation, while populist practice is conceptualised as a systematic dissemination of convincing antagonistic communicative forms (frames for example), intended for strategic political mobilization of people. Author points to the logic of maximization (of votes, audiences etc.) and argues that cleavages (as well as differences) in populisms are the consequence of the interplay of the logic of maximization and various mechanisms and organising principles traversing the differentiated social fields: political field, journalistic field, space of social movements etc. Logic of maximization and a mix of narrow professional institutional practices, generate differences in populisms, which are manifested in rhetoric, content and numerous styles of populist discourse.