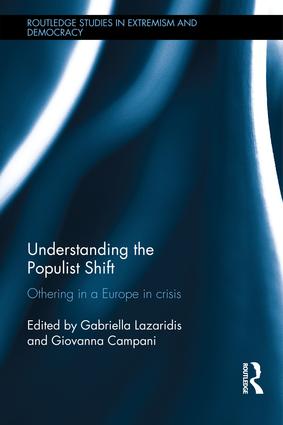 In a book chapter Giovanna Campani and Mojca Pajnik address the nonlinear historical development of the concept of populism in a variety of national and local contexts. Other chapters of this book consider the pertinence of the concept of post-democracy to analyse the present European political dynamics and the growth of populist parties.

Chapters are published in a book Understanding the Populist Shift: Othering in a Europe in Crisis, eds. Gabriella Lazaridis, Giovanna Campani, Routledge, January 2017. The rise of a European populism is the object of a huge amount of debates and academic research. This book aims to contribute to it with some original ideas, by throwing a critical glance at the political discourse of the far and extreme right populist movements and parties in Northern (Finland), Western (Austria, Denmark, France, the UK), Southern (Greece, Italy) and Central/Eastern Europe (Slovenia, Bulgaria). At the same time, the book challenges, where appropriate, the use of the term populism, as differences between Northern, Eastern and Southern Europe are a sign that the political variety of the anti-establishment and Eurosceptic forms cannot be understood under the label ‘populism’ any longer.

Introduction: the concept and its definitions
Giovanna Campani, Gabriella Lazaridis

Networks and alliances against the Islamisation of Europe: the case of the Counter Jihad Movement
Gabriella Lazaridis, Marilou Polymeropoulou, Vasiliki Tsagkroni