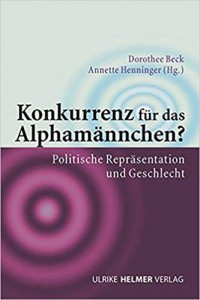 Dr. Birgit Sauer, professor at the University of Vienna, and our colleague working on the research project titled Political and Media Populism: “Refugee Crisis” in Slovenia and Austria analyses political populism at the intersection of gender and masculinities. Recently she published a chapter titled Rechtspopulismus als maskulinistische Identitätspolitik where she explains that the rise and strategy of right-wing populist actors is to re-signify the transformation of gender relations as a „crisis of masculinity“ and to present themselves as saviours able to re-establish masculinity and traditional gender relations by mobilizing male identity politics. Edited volume containing the chapter is titled Konkurrenz für das Alphamännchen Politische Repräsentation und Geschlecht. It was edited by Dorothee Beck and Annette Henninger and published by the german publishing house Ulrike Helmer Verlag.

In November prof. Birgit Sauer presented her analyses on the topic of populism, masculinity and religion in two online lectures as well. In her first lecture, organised on 12th November by the Musikuniversität in Vienna and Freie Universität in Berlin, she illustrated, how the rise of right-wing populism in Austria and Germany is embedded in the transformation of gender relations. Her second lecture, part of the Jean Monnet Lecture Series, analysed the integration policies in 8 European countries. Taking the example of the regulation of Muslim Body Covering she was able to point to the succes of right-wing mobilisation against muslims and Islam as a politics of non-belonging.