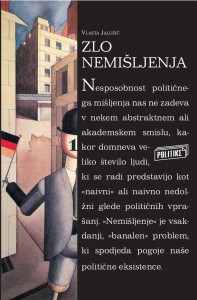 Zlo nemišljenja (Evil of Thoughtlessness) deals with some of the most important political and conceptual dilemmas of our time by using and foregrounding of the perspective proposed by Hannah Arendt – one of the most prominent theoreticians of the 20th century. The book asks questions about, for instance, what have in common mass killings in Srebrenica, erasure of thousands of permanent residents of Slovenia (soon after Slovenia, a former Yugoslav federal republic, became an independent state) and the genocide in Rwanda? Furthermore, what it means when we talk about new, post-totalitarian forms of (global) domination? Jalušič’s study is an attempt to understand what is the ‘status’ of apparently unexpected, violent, extreme and horrible events at the end of the last century; those events which could not be completely understandable within classical categories of war and violence. An important intention of this book is to demonstrate that the violence is only one side of the processes which have been leading to these events and that the ‘methods’ and instruments for exclusion of massive groups of populations – first of all their capacities to think and to act – are not necessarily extremely cruel and violent.

Vlasta Jalušič is a researcher at the Peace Institute Ljubljana, lecturer at the Ljubljana University and Primorska University and a guest lecturer at numerous foreign universities. She is an author of several books and numerous scientific articles on feminist and political theories, analysis of wars and violence as well as on Hannah Arendt’s writings.
E-mail: vlasta.jalusic@mirovni-institut.si