Peace Institute – Institute for Contemporary Social and Political Studies > Publications > No to NATO – Give Us a Break! 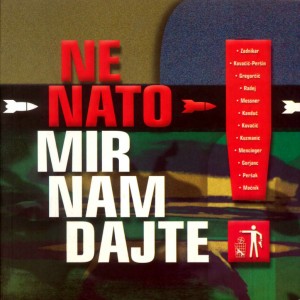 The collection of essays No to NATO – Give us a Break! began to materialize when the debate on Slovenia’s accession to NATO had already acquired a clear-cut shape. Twelve authors (Jože Mencinger, Rastko Močnik, Tonči Kuzmanić, Darij Zadnikar, Zoran Kanduč, Bojan Radej, Tone Peršak, Janko Messner, Peter Kovačič-Peršin, Milan Gorjanc, Marta Gregorčič and Gorazd Kovačič) with diverse intellectual backgrounds and professions have agreed that the predominant argument put forward in support of Slovenia’s accession was pragmatic in character, placing stress on the material and symbolic gains, in contrast to the arguments of NATO opponents, which were explicitly defensive. While the biggest controversies pertained to the issue of whether or not accession to NATO pays off, the authors in this book stress the issue of principle involved in a military pact. They argue against war, the substitution of military structures for security, and any political arrangement in which organized aggression is used to attain economic goals.
Share this article: