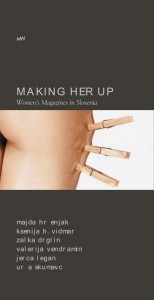 Making Her Up. Women’s Magazines in Slovenia

“In Making Her Up, the authors try to elucidate the precise ambivalence of the image of the modern woman, which is (un)wittingly created by the producers of women’s magazines in co-operation with capitalistic advertising mechanisms and, not least, their own readers. Through the discourse and content analysis of a diverse selection of Slovenian women’s magazines (Cosmopolitan, Jana, Modna Jana, Glamur, Naša žena, and Moj malcek), the writers have uncovered a few representative topics: the contradictory contents of ‘universal women’s culture’; the phenomenon of subtle advertising, with its inexhaustible options among the various types of magazines; fashion as the main theme of each and every one of these magazines; the disciplining of a woman’s mind through the disciplining of her body; cosmetics advertisements; medicine, pregnancy, birth, and the cult of motherhood, which still prevails over the image of the independent, successful, emancipated woman.” (City of Women)