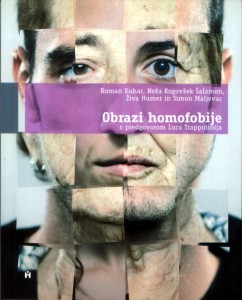 The book “Faces of homophobia” is a sociological and legal study on various aspects and functions of homophobia. It addresses the structural and social dimensions of the hatred against gays and lesbians. The authors of the book do not use the concept of homophobia in a narrow psychological sense, but rather in a broader social and political context through which the mechanisms of social reproduction of homosexuality as a harmful and undesirable identity can be analysed and explained.

In the first part of the book the authors present the development of the concept of homophobia from its original psychological and psychoanalytic contexts to sociological and critical cultural analysis of homophobia. The second chapter presents a systematic overview of the empirical studies conducted on various aspects of homophobia and homophobic violence in Slovenia, while the third and the fourth chapter address and present the latest study on homophobia in Slovenia. The study was conducted as part of the research project “Citizens and Diversity: A Four Nation Study on Fundamental Rights and homophobia” (the coordinator of the project was the Department of Sociology, University of Padua, Italy). The study was divided into the sociological part, within which a qualitative study on the understanding of  and the experiences with homophobia was conducted among students of educational studies (future teachers) and gays and lesbians. This part of the research has focused primarily on the question of how homosexuality is (or is not) addressed in schools and on the strategies that gays and lesbians utilize when faced with homophobia in schools and elsewhere. The second part of the research project was focused on the legal issues, primarily on the question how the law can prevent homophobia and into which legislation homophobia is implicitly inscribed and as such reproduced through the legal system.

The book “Obrazi homofobije” addresses various aspects and manifestations of homophobia in the Slovenian society. It is, as Luca Trapollin, the author of the foreword, claims, an insight into the social reality and practices which allow the hegemonic group to use the symoblic violence and consequently maintain its social and politcal dominance.