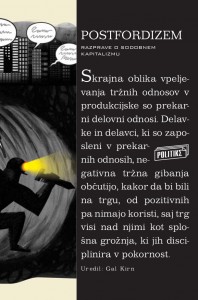 The book is the result of theoretical work, which began in 2004, when the Workers’ Punk University (WPU) organized a year on the topic of post-Fordism. A series of lectures, discussions and reading circles has set guidelines for critical reconsideration of the subject that is virtually disappeared from the university, but also in the wider media horizon. In contrast to the prevailing ideological synthesis of Keynesianism and neoliberalism, WPU discussions of post-Fordism are reaffirmed critique of political economy and cope with the heritage and recapitulation thought of Karl Marx. Post-Fordist theorists with their studies encourage lively controversy, calling into question some self-evident concepts of economic and cultural studies. The book contains some recordings of lectures adapted from the eight-year DPU, but we have it included a few other authors who have focused critical tip to existing schools of post-Fordism.