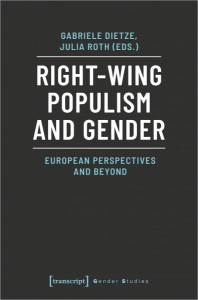 The book Right-Wing Populism and Gender: European Perspectives and Beyond that has just been published (Transcript Verlag, 2020, eds. G. Dietze and J. Roth) examines how extremist populist actors mobilize gender as a meta-discourse, a strategic tool for achieving particular political objectives. The book includes a chapter by Birgit Sauer Authoritarian Right-Wing Populism as Masculinist Identity Politics: The Role of Affects, and a chapter by Roman Kuhar and Mojca Pajnik entitled Populist Mobilizations and Re-Traditionalized Society: Anti-Gender Campaigning in Slovenia.

The chapter shows how the trends of “exclusionary populism” developed in the post ’89 period as a mixture of ethnic nationalism and the re-traditionalization of society. These processes have stimulated politically and religiously motivated protests against same-sex marriage, reproductive rights, and gender mainstreaming. So-called “gender theory” is said to pose a threat to the traditional family and “natural” femininity and masculinity. The chapter approaches the analysis of populism at the crossroads of ideology and political style and analyzes the communication strategies and discourses of selected populist actors in Slovenia who mobilized against gender equality, with the aim of hindering women’s sexual and reproductive rights and the rights of same-sex couples.

Birgit Sauer, a POPMED project researcher argues in her chapter that recent right-wing populist mobilization is a gendered movement, which fosters masculinist identity politics at the intersection of gender, class, religion, ethnicity, and sexuality. Antagonistic strategies of the nationalist, authoritarian, and populist right have to be located in simultaneous transformations of capitalist market societies, of European gender regimes, especially in strong male bread-winner-oriented countries and, thus, ongoing social struggles over class, gender, sexuality, and ethnicity.