Peace Institute – Institute for Contemporary Social and Political Studies > Publications > The Noise from Metelkova. Ljubljana Spaces and Culture in Transitions 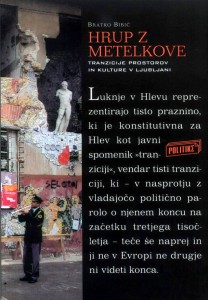 The Noise from Metelkova. Ljubljana Spaces and Culture in Transitions

This study is the result of a research project titled »Spatial Problems Encountered by Independent Cultural Groups« conducted in 1998–2000 by the Peace Institute. The author examined problems related to the allocation of working space to independent cultural groups, because the non-possession of working space is one serious structural problem with which these groups have been continually grappling. Several examples presented in this study illustrate the inferior position accorded to non-institutional cultural production within urban and national cultural policies, in which independent production is marginalized or treated as non-culture. This psycho-drama, »urbicide« and stigmatization of »different« cultures reads like a thriller.
(in Slovenian with English summary)
Share this article: