The book “Razor-Wired” focuses on the period between September and December 2015, a time of the so-called refugee crisis. Discussing and analysing the increased arrival of refugees to the Republic of Slovenia in the fall of 2015, the goal of this volume is to present facts, explain changes in state policies and procedures used to “process” the refugees, as well as critically analyse state, media and the general public’s responses. 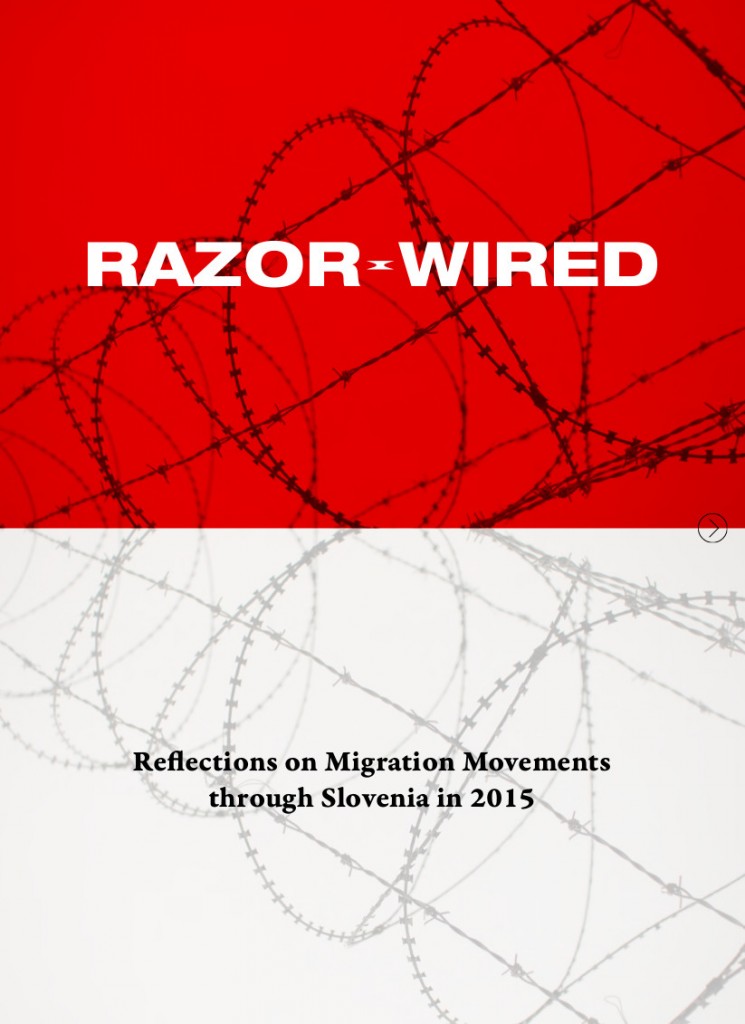 Taking this into account, the present volume wishes to emphasise that the humanitarian crisis in the so-called “refugee crisis” could have been prevented and could have been at least better addressed if the authorities would have put the human rights perspective at the core of their endeavours. Investigating the gaps between law and state practice, Neža Kogovšek Šalamon analyses the legal implications of the factual corridor that Slovenian authorities eventually put in place. Chapters by Maja Ladić, Katarina Vučko and Marc-Antoine Frébutte illustrate what exactly went wrong and how the treatment of refugees could have been bettered. Instead, the situation was treated as a natural disaster and a security threat, hence the response of all the stakeholders/actors within such a context has had only a limited room for manoeuvre. Heavily burdened also by the wider EU security discourse, the Slovenian authorities, a number of media outlets, as well as a significant portion of the public reacted accordingly: with anti-immigrant prejudice and racist hate speech. As analysed by Veronika Bajt, intolerance spiked as a reaction to the rapid increase of various media reports, problematic rhetoric of the political elite, as well as stemming from pre-existing prejudice, especially towards Islam. As Mojca Pajnik’s chapter elaborates, media reporting has shown the declining responsibility of (public) media in their relation to the public. Instead of providing space for informed deliberation, most media outlets merely echo the elite discourse, in this way reproducing the framing of migration as a threat to the nation and to society. As explained in the chapter by Vlasta Jalušič, introducing measures for the “control of migration flows”, the tightening of asylum legislation and the erection of a razor wire fence, are signs of all of us renouncing the ideals of equality and freedom.

The book title’s allusion to the “razor-wire” does not only carry an earily fitting description of the obvious physical barrier of limitation, but is also a powerful symbol of ignorance and a dead-end, uncompassionate attitude towards refugees as our fellow sufferers of the human condition – the Other. Concluding the volume, Lana Zdravković hence calls for a realization that it is high time to acknowledge radical equality where crossing the border stops being a privilege of rich people from “dominant nations”.

“Not many voices oppose the growing demands to prevent refugees from passing through Slovenia, yet those that exist are loud and sound. The book is a valuable contribution to that.”
Vesna Leskošek, Associate Professor, Faculty of Social Work, University of Ljubljana

“The monograph is such an eye-opener that it actually prevents us from shutting them.”
Dragan Petrovec, Full Professor of Criminology at the Faculty of Law in Ljubljana