Slovenia did not participate in GMMP 2015

On 25 March 2015, gender equality in the news media was scrutinized within the Global Media Monitoring Project (GMMP) in more than 130 countries around the world. National newspapers, television, radio and internet news broadcasts and tweets were analyzed by teams of volunteers around the world measuring how well national media are doing in the fair and balanced portrayal of women and men in the news. 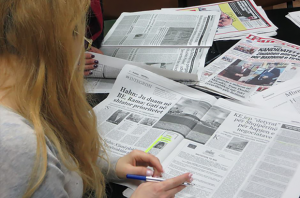 In Slovenia, it was planned for a group of volunteers invited by the Peace Institute (coordinator: Brankica Petković) to take part in that global action. However, once the date of the global monitoring was announced – 25 March 2015, we found out that it is a Mother’s Day in Slovenia and as such methodologically inappropriate for monitoring women representation in the media content. After consultations with the organizers of GMMP 2015, the Slovenian team has cancelled its participation with regret.

The Global Media Monitoring Project is the largest and longest longitudinal study on gender in the world’s media.  It is also the largest advocacy initiative in the world on changing the representation of women in the media.  It is unique in involving participants ranging from grassroots community organizations to university students and researchers to media practitioners, all of whom participate on a voluntary basis. 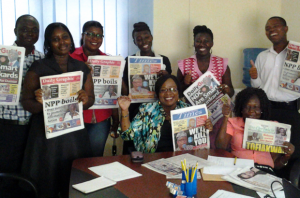 Every five years since 1995, GMMP research has taken the pulse of selected indicators of gender in the news media, studying women’s presence in relation to men, gender bias and stereotyping in news media content.

Slovenia participated in GMMP in 1995 and 2000 when the monitoring was coordinated by the Governmental Office for Women’s Policy (researcher was Doroteja Verša).