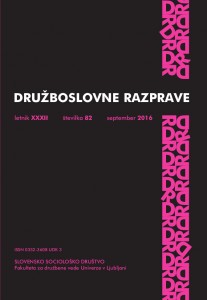 This thematic cluster deals with the analysis of the uprisings in Slovenia in 2012-2013, which, starting in the city of Maribor in autumn 2012, and spreading to many cities throughout the country, brought together protestors who expressed dissatisfaction with local and national authorities and corruption of the political and economic elites responsible for ‘the poor state’ and relations in the country and wider. The biggest mass protests in Slovenia after 1991 gathered in local environments on the streets a great variety of groups, initiatives, individuals in a plurality of voices decisively responding to the global crisis of neoliberalism, mainly on imparting austerity measures and a general crisis of representative political system.

Articles include the analysis of various actors of the uprising, addressing the specifics and differences between the movements and the importance of movement’s action, including the thematization of the role of information and communication technologies in mobilization. The authors who enter the field of studying with different epistemologies at the intersection of sociology, communication science and political philosophy, try to understand the uprising period through the analysis of the dynamics of various actors, as well as through the concept of “new” politics, which is generated by movements. Texts draw from the empirical material gathered within the project Digital citizenship.

Introduction to the thematic clusters

From ‘Let’s throw them out’ to Silenced Streets: A Discussion on Criminalisation of the Uprisings and the Shift towards A Society of Control
Simona Zavratnik, Iztok Šori