Democracies Suffer Hit Across the EU in Year of COVID Pandemic: Press Release 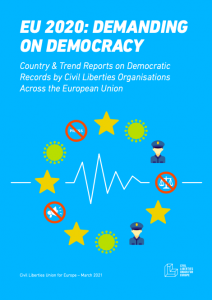 Democracy and the rule of law have regressed across a large number of European countries in 2020, according to a new, wide-ranging report involving 14 national members across the EU of the Civil Liberties Union for Europe (Liberties).

The largest exercise of its kind to date by an NGO network for 2020 finds that media freedom and the freedoms of campaigners and citizens’ groups have taken a particular hit across many of the countries analysed.

Linda Ravo, Senior Adviser to Liberties, said: “Many EU leaders have compromised the health of their democracies this year. While the pandemic has undoubtedly played a part in the weakening of the rule of law, several governments have placed disproportionate restrictions on civic space, media freedom and participation across many EU countries, including some with traditionally strong democratic records. Countries such as Hungary, Poland or Slovenia have just used the pandemic to strengthen their hold on power and limit criticism of the government.

“Journalists and campaigners and citizens’ groups have had a very difficult year trying to do their job of keeping the public informed about how governments and corporations are using their powers. This is particularly disturbing during a crisis when it’s crucial that governments listen to citizens’ concerns and answer to voters about how they use public resources.”

What the EU must do

The EU has a crucial role to play in protecting the rule of law and democracy. The European Commission has taken the important step of auditing countries’ democratic record annually, which this report feeds into. Nevertheless, Liberties urges the Commission to expand the scope of the audit, make sure it contains clear recommendations to individual countries, applies sanctions to countries that are damaging the rule of law, and takes them to court whenever necessary. The EU should also ensure human rights and democracy groups have sufficient funding to carry out their activities.