The overall objective of the project is to secure effective legal, practical and political frame for enjoyment of minority rights on Western Balkans in line with best practices from EU and Balkan states.

There is a common phenomenon in most of the Balkan States related to the legal framework of minorities’ rights protection. Most of the experts agree that due to the accession EU process States like Croatia, Montenegro or Bosnia and Herzegovina, and even Serbia have developed respectable legal framework for the protection of minority rights. However, there is a lack of implementation of the legal framework and the violations and lack of respect of minority rights are still problems in those states. There are several reasons why the implementation of the legislation is lacking. Most of the arguments are in the direction on non-developed state institutions, legacy of post war society and transition. But also one must be aware of two additional arguments: 1. Most of the legislation is not developed from the best practices of inter-ethnic relations in Balkans but rather the standards are coming from outside 2. There are no inter-state communications on different minorities’ positions in different states. The goal of this project is to include and develop those two methods in improving minority rights in the region.

This project will create the frame within which the minority rights will be more implemented and will not be only written on the paper. Moreover, the specific objective is to create inter-state platform for the improvement of existing minority policies, laws and practices through the promotion of best practice examples from EU and Balkans to major stakeholders in Western Balkans. Combining research process (detecting good practices) as a source of building new relations with the culture (exhibition, documentary film) and the final conference, the project will contribute to the better implementation of minority rights in the region.

– Programme of the Conference

Kosinj and neighbouring villages, passive parts of Lika (on Serbian-Croatian border) are tormented by floods every twenty years or so, due to heavy rains and snow melting. Villages, couple of kilometres away from river Lika, are under water. The whole region becomes one huge lake where the only communication mean is by boats. Film follows stories of two volunteers – during the flood, each of them becomes the only link with the rest of the world for their respective communities, Serbian and Croatian. Film had its premiere at 16. Sarajevo film festival in July 2010, where also got EDN TALENT GRANT award by the Sarajevo film festival in cooperation with European Documentarist Network, with the aim of support talented authors of documentary film from the region.
Film will be presented in all countries of ex-Yugoslavia.

Exhibition documents the life and work of the man who was the head of the police office in Osijek, Croatia in the time just before the starting of war conflicts in ex-Yugoslavia. In that time he put very much effort in personally engagement to prevent bloody conflicts, which were just about to start until he was shoot in vague circumstances on 1st July 1991, and so became the first victim of the approaching war.  Exhibition shows many documentaries facts from the life of the man who became symbol of the peace in the Balkan war.
Exhibition will be presented in all countries of ex-Yugoslavia.

Concept of the Exhibition

Presentation of the exibition in Slovenia: 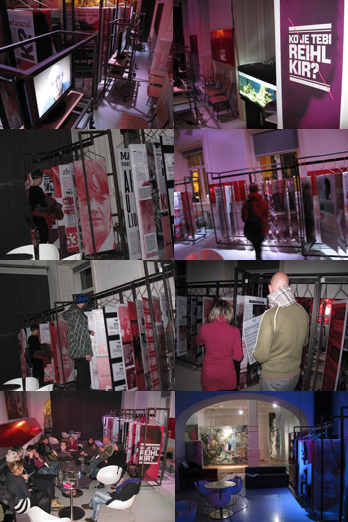