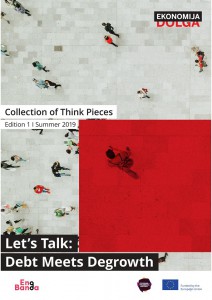 The Collection of Think Pieces was created as part of the international seminar “Let’s Talk: #Debt Meets#Degrowth” on the topic of growth and debt in early June at the Tabor Sports Association. The beautifully designed booklet by designer Andreja Vekar contains 11 texts together with the editorial by Ajda Pistotnik – The Future Is Now – Think Degrowth, which are classified into three thematic groups: illegitimate debt, housing policy and new policies.

You can read and download the collection of essays here.

“The change towards new politics can only be implemented by us, the people who are aware that we have the power, that we are the only possible political entity and that we have the responsibility for political actions and political changes in the world.

The dominant understanding that parliamentarism is the only possible way of doing politics should, could and can be changed: self-organized, autonomous grassroots groups, collectives and initiatives have proven that through the long history of struggle within the dominant system. New politics has an important goal, namely to face the dominant state of “capitalo – parliamentarism” or the “all-too-objectivist apparatus of the market economy and the electoral ritual with sense” as A. Badiou put it, and to pull people out of passivation, lethargy and depression. Real politics should be able to find ways for reinvention of the political engagement starting from the local level to all the levels of society.