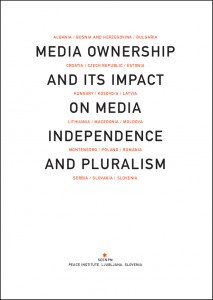 Media Ownership and Its Impact on Media Independence and Pluralism

Media Ownership and Its Impact on Media Independence and Pluralism – the project, now published in book form, is an attempt to map ownership patterns and their effects on media pluralism and independence in the countries of South East Europe and EU member states from Central and Eastern Europe. The eighteen country reports and a regional overview are a result of the project organised by the South East European Network for Professionalisation of the Media (SEENPM). The project was conducted from July 2003 to June 2004 and was led by the Peace Institute in Ljubljana, itself a member of the SEENPM.