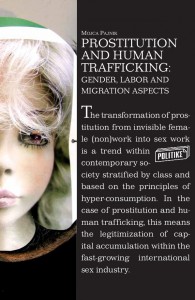 The author adopts an original approach to problematizing dominant representations about prostitution and trafficking in human beings, thus opening new avenues of thought. In the first part of the book, she looks into prostitution from the historical perspective and analyzes contemporary policies relating to prostitution and trafficking in human beings in Slovenia and several European countries. In the second part, she gives voice to the various protagonists of prostitution – prostitutes, their clients, and managers – whose narratives reveal their views on national policies, legal restrictions and stigmatization as well as different experiences of intimate relationships.

From the book reviews:
The author analyzes the phenomenon of prostitution using an innovative approach, laying out her argument with scientific precision and demonstrating good knowledge of previous studies. (…) The text intertwines theoretical recognitions and an empirical study, where narrating about prostitution is the basis of this novel approach not yet used in Slovenia.
Tanja Rener, PhD, University of Ljubljana

An important part of this research is stories told by women and men variously involved in prostitution – as prostitutes, clients, and organizers/pimps. This chapter is in my opinion one of the most important ones, since the narration of stories enables us to rise above prejudiced opinions, judgments and knowledge.
Vesna Leskošek, PhD, University of Ljubljana

On the author:
MOJCA PAJNIK has a PhD in communication studies. She is a researcher at the Peace Institute where she heads several international research projects, and an assistant professor at the Faculty of Social Sciences, University of Ljubljana. Her research work is focused on migrations, citizenship, gender studies and media. She is the author of numerous academic papers and co-author of several books.
E-mail: mojca.pajnik@mirovni-institut.si

Proletarization, domestication and gender inequality
The production of a “social evil”
The ideologems of protection and hygiene
Contractual restrictions of work and sexuality for women
Feminist perspectives
The social purity groups and the doctrine of individualism
Trafficking in human beings as a media scandal
White slave-victim, dirty prostitute-professional
White slave-non-victim-foreigner: tightening migration laws

PROSTITUTION IN SLOVENIA THROUGH STORYTELLING

On reasons for prostitution
Voluntary vs. forced prostitution
Prostitution inside a country and outside it
Prostitution in night bars and apartments
From escort prostitution to prostitution for drugs
Intimacy in prostitution
Between prostitution procurement and self-organization
Clients
Partnership as a burden, the idealization of paid sexuality
Women as “nurses,” prostitutes as social workers
Social security, health and a consideration about legalization
Opinions on trafficking in human beings

REARTICULATION: BEYOND THE CURRENT PARADIGMS