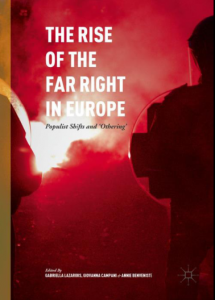 Article Populism in Slovenian Context between Ethno-nationalism and Re-traditionalization

he Rise of the far Right in Europe: Populist Shifts and »Othering« Eds. G. Lazaridis, G. Campani, A. Benveniste (Palgrave, 2016)

Book chapter »Populism in Slovenian Context between Ethno-nationalism and Re-traditionalization« by Mojca Pajnik, Roman Kuhar and Iztok Šori analyses ethno-national and ethno-religious populism that the authors relate to processes of retraditionalization of the Slovenian society. Published in: The Rise of the far Right in Europe: Populist Shifts and »Othering«, eds. G. Lazaridis, G. Campani, A. Benveniste, Palgrave, 2016.

The results of the last European Elections of 2014 confirmed the rise of right and far right ‘populist’ parties across the EU. The success of a range of parties, such as Denmark’s Dansk Folskeparti, Slovenia’s Slovenska demokratska stranka, France’s Front National, Greece’s Golden Dawn, the United Kingdom Independence Party, Beppe Grillo’s Five Star Movement in Italy and the Austrian FPÖ, has been perceived as a political wave which is transforming the face of the European Parliament, and challenging at some level the hegemony of the ‘big four’ well-established European political forces that lead the Strasbourg’s assembly: the ALDE, EPP, S&D and Greens/ALE. As ‘populism’ has become a major issue in many EU countries, this collection aims to provide a critical understanding of related trends and recommend ways in which they can be challenged both in policy and praxis, by using the gender-race-ethnicity-sexual orientation intersectionality approach.

Giovanna Campani, Gabriella Lazaridis and Annie Benveniste
Introduction: The Concept and Its Definitions

Giovanna Campani
Neo fascism, from the XXth Century to the Third Millennium: the Case of Italy

Annie Benveniste and Etienne Pingaud
Far Right Movements in France: the Chief Role of National Front and the Rise of Islamophobia

Birte Siim and Susi Meret
Right Wing Populism in Denmark: People, Nation and Welfare in the Construction of the ‘Other’

The book brings the analysis of results of the RAGE project.

Leaflet of the book.