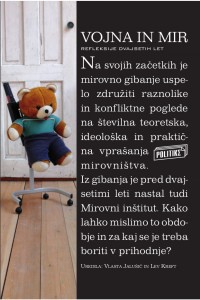 War and Peace. Reflections of the Last Twenty Years

In book War and Peace  are published articles by authors, who responded to the invitation to the twentieth anniversary of the Peace Institute to contribute their critical views on the functioning of the Institute, questions of war and peace in the former Yugoslavia, the new military alliances and participation in international military intervention and contemporary problems intermingling of peace and war. In the first part the collected contributions are dedicated to reflecting the formation and operation of the peace movement and Peace Institute before 1991 and after, as well as the question of the role and importance of pacifism and civil society movement in the narrow, Slovenian environment. The contributions in the second part of the book focuses on the direct and comparative research of post-socialism, transition, war and peace, as well as direct experience in the field of peacebuilding in the international arena.