Peace Institute – Institute for Contemporary Social and Political Studies > Publications > We About the Roma. Discriminatory Discourse in the Media in Slovenia 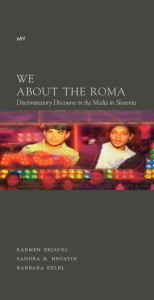 We About the Roma. Discriminatory Discourse in the Media in Slovenia

Today the mass media are the key compilers of the agenda setting the importance of topics that are publicly discussed, that is to say, the topics that people consider or talk about. Through the choice of topics, sources, genre, language and style, the media daily construct the image of “us” as the representatives of a majority population, and of “them” as the representatives of a minority. They impart only specific cultural patterns, add new meanings to them and, finally, make them common-sensical, universal and exclusively correct.

This study analyzes the Slovenian media writing about the Roma in autumn 1997 when the villagers of Maline set up a village watch to prevent the settlement of a Romani family who bought a house in their village. The prevalent mood of the coverage could be summed up with a single word – “problems”. Moreover, when writing about the Roma, the media invariably use the expressions “Romani issues” or “Romani problems”. The media are not interested in their difficulties unless they turn into a conflict that also threatens to affect the majority population. Out of 131 accounts in newspapers, on television and radio, only one falls short of our hypothesis that the media write about ethnic minorities only when they are involved in some conflict.