Racism: Cut up World, Reprint of the special issue of the Journal for the Critique of Science, Imagination, and New Anthropology, Pajnik, Mojca, Erik Valenčič, eds., No. 260 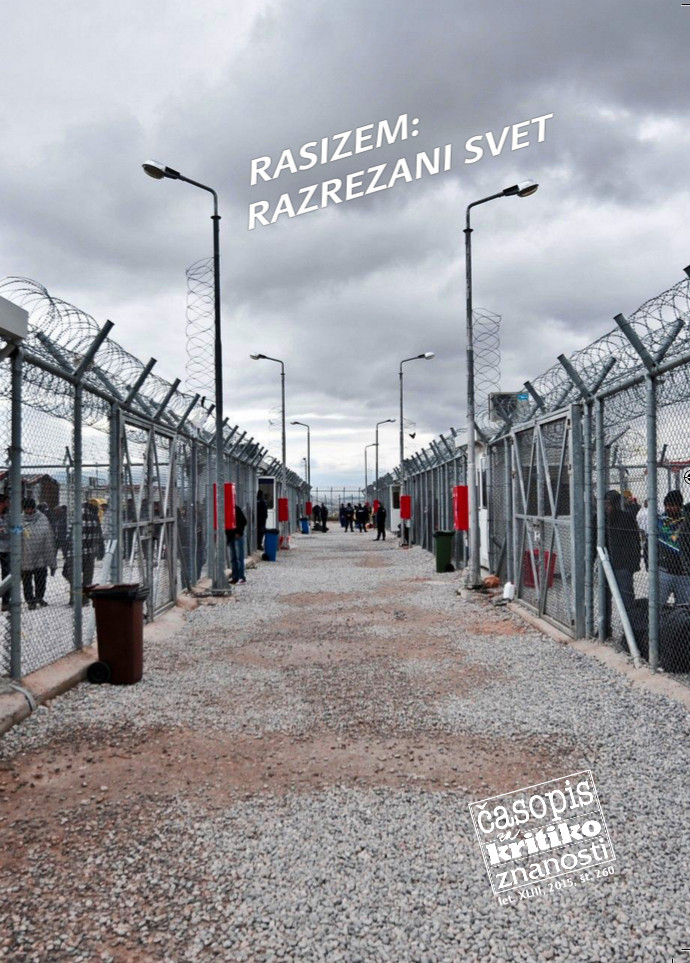 The reasons for ČKZ issue on racism are multifold and are reflected in all the women, men, children, teenagers who come to Europe because of the war, climate change, economic or personal reasons. There are awaited here by racism of political parties and groups, which moved from obscurity to the centre of decision-making. Both left and right, merged into the European centre, enclosed in alienated institutions, internalized racism as agenda of its policies, instead of building cordon sanitaire around racism. Racist political parties are now part of the European Parliament and other institutions of decision-making. In the last decade right-wing and far-right parties strengthened their position, their election scores rose visibly. During this time also paramilitant, far-right groups which in closed camps worship fascism and Nazism while gaining approval in public life for their patriotism, i.e. “good nationalism” increased membership and public visibility all over Europe. Their targets are migrants, Muslims, Roma, they call for the lynching of LGBT-people, celebrate war and the Holocaust. We have experienced a re-legitimization, and with it a resurgence of racism, while the notion of racism was chased from the political vocabulary when political elites tell us that racism no longer exists. In this issue of ČKZ we disclose masks of racism, and draw attention to its vitality and ubiquity.

7 Mojca Pajnik: In Behalf of the People: Contemporary Processes of Racialisation

44 Gal Kirn: What does the Name ‘Pegida’ stand for?

NORMALIZATION OF RACISM IN SLOVENIA

87 Ana Frank in Iztok Šori: Normalization of Racism through the Language of Democracy: the Case of the Slovenian Democratic Party

102 Iztok Šori: For the Well-Being of the People: (Far Right) Populism in the Discourse of the Party New Slovenia

116 Roman Kuhar: It’s the End of the World as we Know it: Populist Strategies of the Opponents of the Family Code

131 Nina Meh: Evential Time: The Analysis of Media Discourse in the public debate on Family Code

151 Veronika Bajt: Nationalism and Racism in the Patriotism of the Project “Here is Slovenia”

169 Facsimile of the Judgment in the Case Valenčič

RACISM IN THE ENTRAILS OF EUROPE

188 Gabriella Lazaridis in Vasiliki Tsagkroni: ‘Modern day blackshirts’ in Greece and the UK: hate strategies and actions against the ‘other’

213 Erik Valenčič: Awakening of Darkness in the East

270 Ildikó Barna: Teaching about and against Hate in a Challenging Environment in Hungary: a Case Study