In the first month of the third government led by SDS and Janez Janša, the Government Communication Office took a central role in targeting the usual suspects of the ruling party: Non-governmental organisations, the media and journalists.

In Slovenia, the new government, led by Prime Minister Janez Janša, and dominated by his right-wing party SDS came into power on 13 March 2020, only a day after the coronavirus epidemic was officially announced in the country. It replaced the centre-left minority government after the resignation of former Prime Minister Marjan Šarec. This is Janša’s third term as Prime Minister. The political agenda implemented in the years when the party was in power, but also when it was in opposition, laid the groundwork for who the targets of its suppressive policies and defamatory rhetoric will be this time round.

In the Janša government’s first month in power, the Government Communication Office took a central role in targeting non-governmental organisations, the media and journalists. At the same time Janša has been using his Twitter account to attack his targets.

The trigger for these attacks was 107,000 euros that, during the previous government’s term, the Government Communication Office granted to 15 non-governmental organisations for 16 projects with budgets ranging between 5,000 and 9,000 euros. These projects include one aimed at informing secondary school students about multifaceted aspects of migration, and encouraging solidarity, which included workshops at which young migrants, refugees and asylum seekers made speeches. The project, that has a budget of 7,000 euros, is a continuation of previous similar actions of the Peace Institute, a non-governmental research institute that has often been a target for smear campaigns in SDS-affiliated media, and by the party’s officials and supporters. The contracts for funding the projects had already been signed, but the new director of the government office sent all of them an annex terminating the contracts. The government office tried to explain this away by claiming that during the coronavirus pandemic the money is needed for other purposes, while the project activities of non-governmental organisations cannot be implemented anyway because of the lockdown. Several non-governmental organisations publicly opposed this measure while the umbrella organisation of non-governmental organisations, CNVOS, advised its members not to sign the annex. The Prime Minister used his social media accounts to label the non-governmental organisations “partners” of the leftist parties and claimed they were enriching themselves at the expense of hardworking taxpayers. The cover page of the weekly magazine controlled by the ruling party ran pictures of four men, including NGO representatives, under the title “They want money for themselves, not for fighting Covid-19.” 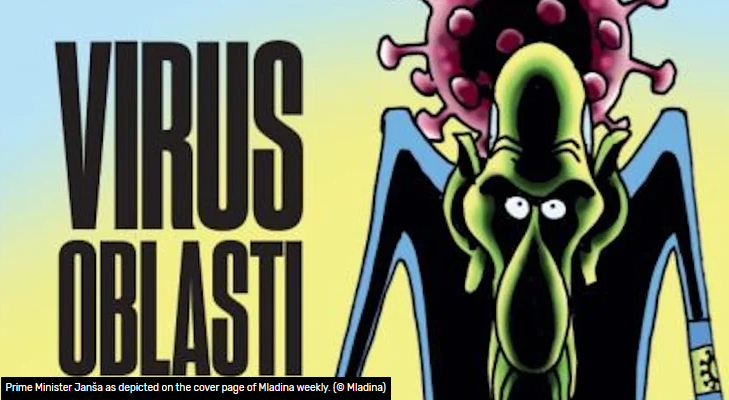 CNVOS has countered the manipulative presentation of data on public financing of non-governmental organisations by SDS representatives and media affiliated to the party, and regularly updates verified data on its own web site. It raised its voice when, during the 2018 election campaign, an SDS official threatened to cut public funding to non-governmental organisations once the party gained power.

Unlike other umbrella organisations representing various sectors in Slovenia, the new government did not invite CNVOS to take part in the consultations on the legislation introducing support schemes to employers and employees, and to other parts of population, to cope with the consequences of the pandemic. However, CNVOS did manage to bring the views of non-governmental organisations to the table and influence the solutions through its member organisations which are directly engaged in countering the pandemic.

It is not clear what will happen with to state funding of other NGO-run projects, and to what degree SDS will carry out threats to cut funding it made during the 2018 election campaign. State spending is now restricted, and amendments to the 2020 state budget are being discussed. The specific aim of this would be to postpone or cancel funding that does not help fight the coronavirus pandemic. Although these cuts may be reasonable in some cases it is also a useful smokescreen to cut funding to NGOs that are seen as being against the ruling party’s agenda.

Examples of this include the state cutting support for and NGO called PIC providing legal counsel to asylum seekers. The government is expected to provide co-funding to already allocated funds for that purpose from the Asylum, Migration and Integration Fund (AMIF) of the European Union. On 1 April, the contract between the Ministry of Interior and PIC expired, and the procedure for the contract extension or selection of the new provider has not been initiated yet. Furthermore, asylum application procedures have been halted by the government as part of the measures introduced by the law to cope with the spread of coronavirus.

A toxic environment for journalists

Earlier in April the Government Communication Office replied to reports by the Council of Europe’s Platform on Protection of Journalism and Safety of Journalists. The alert published by the platform notes Prime Minister Janša’s use of social media to accuse the Slovenian public broadcaster Radiotelevizija Slovenija of spreading lies about the government and to issue a veiled threat over its funding. In March, Janša said on Twitter: “Don’t spread lies, TV Slovenia news program. We pay you to keep us informed in these times, not to mislead the public. Apparently there are too many of you and you are paid too well.” This was Janša’s reaction after TV Slovenia aired an interview with a trade unionist who criticised the government’s decision to raise the salaries of ministers and state secretaries.

This is not an isolated statement from the Prime Minister. RTV Slovenija was a target of defamatory claims made by Janša and other SDS officials while they were still in opposition, including calling on citizens to stop paying their licence fees. The Slovenian Association of Journalists and the management of public broadcaster responded publicly to the Prime Minister’s statement describing it as a threat to media freedom and independence of public media. Most recently, on 16 April, the new government replaced the government representatives in the Supervisory Council of the public broadcaster.

In the reply submitted to the Council of Europe’s platform by Slovenia’s Permanent Representation to the Council of Europe, and prepared by the Government Communication Office, it is argued that the Council of Europe’s attention should be drawn to the broader context of the media situation in Slovenia, including historical facts in the development of the media market. It says that “the majority of the main media in Slovenia have their origins in the former communist regime, and even in the late 1990s the positions of editors-in-chief were held by former members of the infamous security service UDBA.” However, the reply fails to mention the media group established by SDS representatives in 2015. This media group has been financially supported by Hungarian businessmen connected with the Hungarian Prime Minister, Viktor Orban. Several national TV, print and online outlets and more than a dozen local and regional online media outlets in the group serve as a mouthpiece for SDS propaganda, disinformation and hate campaigns, particularly online, based on islamophobia and anti-Semitism, but also targeting human rights defenders, critical journalists and public service media. These campaigns include use of private data and family affairs to intimidate the targets.

The current Minister of the Interior was the director of the media group before his cabinet appointment, and the current director of the Government Communication Office was previously editor in chief of a TV channel and an online media outlet that are part of the SDS supported media group.

The journalists that exposed the controversial model of ownership and financing of the media group affiliated to SDS were subject to harassment and threats while negotiations for the new government coalition under SDS leadership were ongoing. A journalist that submitted a freedom of information request to the Government to obtain information on the functioning and structure of the newly founded Crisis Headquarters responsible for combatting Covid-19, did not receive a standard response but was instead attacked with defamatory claims posted on the official social media account of that body. This was followed by a smear campaign in the SDS-affiliated media and by an anonymous death threat to the journalist. The International Press Institute warned that “Slovenian journalists are operating in increasingly toxic atmosphere” and called on the new government to ensure journalists’ right to work without fear in a time of crisis. Seven international media freedom organisations jointly sent a similar appeal. When the national press agency, STA, published a report about the letter of the international media freedom organisations, Prime Minister Janša accused STA of serving as a “ventilator for fake news”.

Origin of threats to political independence of the media

The media system in Slovenia has many deficiencies and lacks an adequate media policy and regulatory framework to protect public interest in the media and provide an enabling environment for professional journalism and media pluralism. The EU-funded media pluralism monitoring (MPM) of the Centre for Media Pluralism and Media Freedom at the European University Institute, places Slovenia together with many other EU Member States in the category of countries with medium risk for endangering media pluralism in most of the indicators. Political independence of the media is the domain where a high risk was identified in the reports on media pluralism in Slovenia in 2015 and 2017. According to the MPM assessment, this is the result of three major issues. Firstly, members of the two governing bodies of public broadcaster RTV Slovenia are in majority appointed by the parliament or the government (which was introduced by the Janša government in 2005). Secondly, the main press agency, STA, is state-owned, and thirdly, there is a media group in the country, including TV, online and print media, that is closely affiliated to the biggest political party in the country, namely SDS.

Media industry associations, the association and union of journalists and independent experts in Slovenia have been expressing criticism towards the previous governments requesting thorough policy changes to preserve professional journalism and protect media pluralism, but several centre-left governments which were in power in most of the past decade failed to introduce such a reform.

Article by Brankica Petković was published on Liberties Website.