The Peace Institute started supporting and cooperating with a group of women in Kigali, Rwanda in 2007 and soon Nyamirambo Women’s Center was established. Since then, 6 projects have been implemented, and the Center is becoming more and more successful and popular among tourists, volunteers and others. The Center’s mission is to contribute to capacity-building of the most disadvantaged women, through coaching, learning, and income-generating activities. 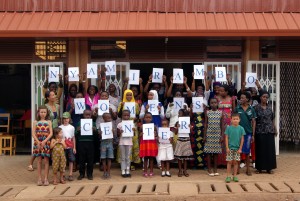 At first, projects which were financially supported by the Slovenian Ministry of Foreign Affairs and The Delegation of EU to Rwanda, were focusing on education, empowerment and capacity-building of the Center’s members, as the idea was to help the Center become self-sustainable on the long term. Soon, this became a mission of double-empowerment, as there were so many issues local women were facing, and so many needs to be addressed. The Center started offering free informal education for women and girls that didn’t finish or never went to school (Kinyarwanda literacy, English, and computer class) and trainings in sewing and handicrafts, which enabled local women to earn some basic income. In 2014 a small community library was opened and the Center started promoting the culture of reading.

Also the Center needed to focus on income-generating activities if to be self-sustainable. First such activity is responsible community-based tourism – the Center’s walking tour was first of its kind in Kigali and became one of the most attractive activities for tourists, and the second is sewing and selling the products – which (with extensive help of a Swiss volunteer) in 2014 grew into the Cooperative Umutima which at the moment employs around 25 local women.

Nyamirambo Women’s Center has been presented and recommended in numerous media, documentary films, on websites, blogs, etc.: NWC Walking Tour is listed among 11 Kigali attractions on Tripadvisor and as second of 31 fun things to do in Kigali on Living in Kigali, Nyamirambo Women’s Centre featured in BBC documentary How Women Have Rebuilt Rwanda and SLOGA’s documentary We are also part of the same world (Tudi mi smo del istega sveta), was warmly recommended on TV show and website Awesome Africa, several blogs like this one called Little Jars and the story about the President of the Center has been published on the website European Year for Development.