We are concluding another successful project in Rwanda

The Peace Institute has also been operating in Rwanda since 2007. With our support a group of women established a local NGO – the Nyamirambo Women’s Center (NWC). Since then, we have implemented seven joint projects – in October we are concluding the last one entitled “Education and economic empowerment of vulnerable groups of women in Rwanda“, funded by the Ministry of Foreign Affairs of the Republic of Slovenia.

The aim of the project was to increase the literacy and economic independence of vulnerable groups of women/girls in four local environments in Rwanda (Kigali and surroundings) and to contribute to reducing the gap between men and women. We conducted free literacy, sewing and hairdressing courses, which were attended by more than 780 women. We gave the advantage to participate to particularly vulnerable women and girls who improved their position in society with the acquired knowledge and skills for the profession of seamstress or hairdresser. As part of the project, we also strengthened the capacity of the local women’s organization NWC, cooperative Umutima and local government representatives to promote equal opportunities, empower women, reduce discrimination against women and gender differences. We conducted workshops and a study visit for a total of 70 participants. There are more than 850 direct beneficiaries of the project. In the long run, public awareness and support of local government representatives will also contribute to gender equality. 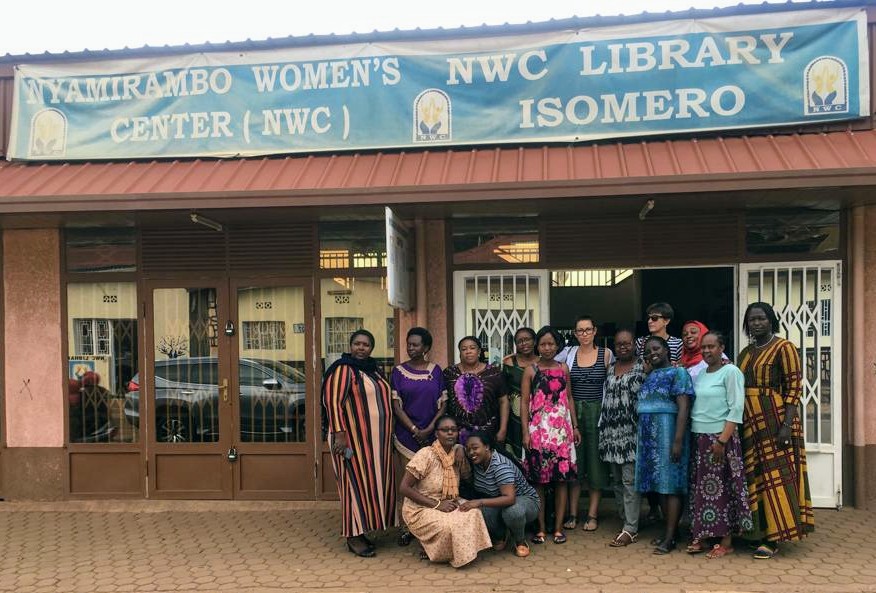 Of course, the Covid-19 pandemic also affected our project, and even more so the lives and work of our Rwandan colleagues and beneficiaries. As much as necessary, we adapted the implementation of activities to the Covid-19 situation and measures. Part of our budget – 14,710 euros – was allocated for the fight against Covid-19 in Rwanda, and we distributed more than 1,000 aid packages (food and protective items). A country about the size of Slovenia finds it difficult to take care of all its 12 million inhabitants, especially since most of them work informally. Preventive measures (such as restriction of movement) had the most negative effect on these informal workers, as they were left without the possibility of occasional work and earning a living practically overnight.

Unfortunately, Covid-19 has drastically affected the income decline of both the NWC and the Umutima cooperative, which employs about 55 women. Until March 2020, the earnings from the sale of Umutima products provided employed women with a regular monthly income, and partially enabled NWC to operate and develop. Another activity that we have developed through several projects and represented a source of income for NWC until March 2020 is responsible community tourism. NWC conducts guided tours of the local community, cooking courses and basket weaving workshops for tourists and other visitors, who have the opportunity to learn about events and dynamics in the local community, and NWC representatives explain the social, cultural, economic and political context of this part of Kigali. Since March 2020, due to Covid-19, there are practically no tourists in Rwanda, so NWC has not conducted guided tours and workshops up to now. Also Umutima did not sell many products and did not get any bigger orders, apart from some face masks orders.

Given that both NWC and Umutima are very successful in their work, we believe that both women’s teams will also survive the crisis caused by Covid-19. At the Peace Institute, we strive to successful cooperation and new interesting projects in Rwanda in the future as well.