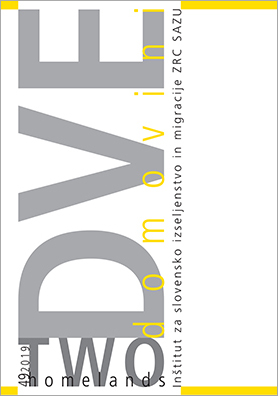 A new thematic issue of Two Homelands Journal was released discussing criminalization of migration, with scientific paper written by all nine members of the research team of the project “Crimmigration between Human Rights and Surveillance” (Slovenian Research Agency, 2016-2018).
In the papers the authors present their research work which focuses on a number of geographies and types of migrant criminalization. In the introductory paper the authors Veronika Bajt and Mojca Frelih conclude that migration policy in Slovenia is becoming stricter and progressively headed in the direction of increased criminalization of migration. Jaka Kukavica and Mojca M. Plesničar analyze a general turn towards a harsher treatment of foreign offenders as there have been more convictions and more foreigners in prison recently. Aleš Završnik discusses how, by “tattooing” borders onto immigrant bodies, disciplinary power is being superseded by the post-disciplinary power of “instant surveillance”. Neža Kogovšek Šalamon, also head of Crimmigration project, analyzes how the transposition of the EU acquis also increases the criminalization of migrants, which highlights the problematic role of the EU and national legislators in WB in relation to the fundamental rights of migrants. Vasja Badalič discusses the practices used by Turkey, Jordan and Lebanon to prevent Syrians from exercising their right to seek and enjoy asylum. Further, Vlasta Jalušič addresses the problem of the surveillance, disciplining and criminalization of practices of non-governmental initiatives which offer help to irregular migrants, asylum seekers and refugees in Slovenia and four neighboring countries. Finally, Mojca Pajnik, inspired by the autonomy of migration approach, analyzes borders as sites of control and violence but also as migrant praxis, as strategies of escape and rupture.
CONTENT

NEŽA KOGOVŠEK ŠALAMON: The Role of the Conditionality of EU Membership in Migrant Criminalization in the Western Balkans

VASJA BADALIČ: Rejected Syrians: Violations of the Principle of “Non-Refoulement” in Turkey, Jordan and Lebanon

MOJCA PAJNIK: Autonomy of Migration and the Governmentality of Plastic Borders

ALEKSEJ KALC: The Other Side of the “Istrian Exodus”: Immigration and Social Restoration in Slovenian Coastal Towns in the 1950s

KATJA HROBAT VIRLOGET: The “Istrian Exodus” and the Istrian Society that Followed It

IGOR JOVANOVIĆ: Illegal Migration from the Croatian Part of Istria from 1945 to 1968

MIHA ZOBEC: The Surveillance and Persecution of Slovene Antifascists in Argentina: How the Authorities Conspired in Combating “Undesired” Immigration