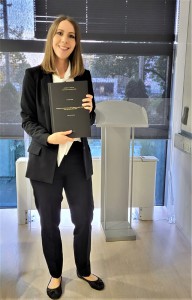 Our colleague from POPMED team Emanuela Fabijan defended her PhD thesis (under the mentorship of Mojca Pajnik) from communications at the Faculty of Social Sciences, University of Ljubljana entitled »Populist Communication and Gender in the Case of the European Refugee Crisis from 2015 to 2018«. Sincere congratulations for this achievement!

The dissertation deals with populist manifestations of gender in political and media communication in the case of the European refugee crisis. Discussions of politicians at the National Assembly’s sessions on selected legislation and journalistic commentaries from daily newspapers (Delo, Dnevnik, Večer, Slovenske novice) are analysed by applying frame analysis. The operationalisation of populism is based on the analysis of three dimensions that are crucial for measuring populism: people-centrism, anti-elitism and Othering. Ideological perspectives significantly mark the narrative structure of populism. Research findings have shown that left-wing populism considers refugee women and men as the people in an antagonistic relationship with the political elites; the latter trigger military conflicts, violate the rights of refugee women, men, and children, are alienated from them and manipulate voters. For left-wing populism, the people represent an entity that transcends differentiations on the basis of citizenship and religious affiliation, while right-wing populism views the people as a national community, which encompasses the Slovenian nation with Slovenian culture and Christian foundations and is part of a broader «European culture» and «Western civilisation». Right-wing populism builds on a dichotomous relation between the people (which in this case includes Slovenian female and male citizens) and migrants, especially Muslim male migrants, who represent a uniform group, based on security risks; endangering «our nation», culture and civilisation; economic damage; threats to gender equality and a demographic challenge. Right-wing populism therefore relies largely on the reproduction of the populist antagonism of Othering and on the worship of the Slovenian people, compared to left-wing populism, which mostly builds on anti-elitism. Coherence of populist framing is present in the discussions of politicians and commentaries of journalists. Both groups, when they apply populism, frame migrant men through a perspective of a terrorist, sexual or general security threat to Slovenian and European women, and Slovenia and Europe in general, and call for the protection of women’s rights as »European» or «Western values» and ensuring public security by restrictions of asylum legislation and strengthening border control. In the primary antagonistic relation between the people and the elites, gender does not play such an important role as in the relationship between the people and the Others, which suggests that the question of gender is a secondary tool for populism that serves a nativist agenda.