Peace Institute – Institute for Contemporary Social and Political Studies > Publications > Sensitizing the concept of mediatization for the study of social movements, Article in Communications 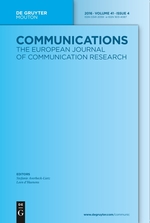 Sensitizing the concept of mediatization for the study of social movements, Article in Communications

The authors published research findings on communication practices and strategies of social movements and activist initiatives in Slovenia (Sensitizing the concept of mediatization for the study of social movements) in the Communications magazine (The European Journal of Communication Research, published by the German publishing house Degruyter). The focus of the analysis is, in particular, on the strategies and practices of social movements and their confrontation with the various logics (journalistic, political, etc.) of the field during the All-Slovenian People’s Uprising (2012-2013). The empirical data were obtained through 19 in-depth interviews and focus groups with the (most important) actors of the time, and the authors interpret the data and basic findings within the conceptual framework of mediatization on the one hand and sociology and the history of political movements on the other. The empirical part, as part of a project study under the Digital Citizenship (ARRS) core project, was carried out as early as 2015, and the process of coordinated writing and reflection of findings between author and author has been ongoing since 2017. The article is currently (electronically) available online for authors, and will be out in print in early 2020.